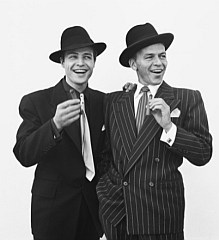 
'Guys and Dolls' is a musical made in 1955, directed by Joseph L. Mankiewicz and starring Marlon Brando, Frank Sinatra, Jean Simmons, and Vivian Blaine. The music and lyrics are by Frank Loesser and the film is based on the successful Broadway musical which premiered in 1950.

The film was critically well received on its release in November, 1955 and it has remained popular ever since. It was ranked at number 23 on the American Film Institute's list of best musicals and the song 'Luck Be a Lady' is number 42 on their list of the greatest film songs. It was budgeted at about $5million to make and globally it has made aroung $20million.

Search Amazon for 'Guys and Dolls'

The plot is a thin one and is basically a pretext for the song and dance numbers. Nathan Detroit (Frank Sinatra) is a gambler who is trying to get hold of $1000 to organise an illegal crap game. His problems are intensified by his fiancée, Miss Adelaide (Vivian Blaine, reprising her Broadway role), who wants to be his wife and by the police in the shape of Lieutenant Brannigan (Robert Keith).

Hollywood's stereotyping of national cultures regularly gives offense, but who can resist the glimpse of Havana, Cuba, in one of the central scenes of 'Guys and Dolls?' As the Salvationist gets drunk with the suave Sky and succumbs to her reckless impulses she is inflamed by the primal, Latin American drama unfolding around her: her instant rival, an exotic dancer, trying to seduce Sky. Soon the whole room is swept up in a hilarious dance of drunken passions.

The scene offers a magnificent example of Michael Kidd's revolutionary choreography for film. Normal, everyday gestures, such as walking or pointing, are by degrees stylized, made angular and rhythmic, until the point of full blown dance. The actions of individuals are woven into group patterns. And, above all the staging incorporates movements that are deliberately ungainly, awkward, seemingly amateur-such as Sarah's drunken lunges and swings.

'Guys and Dolls' is really two films in one, divided up for its dual male stars - and indeed, there is an over-the-table dialogue between Brando and Frank Sinatra that anticipates the Al Pacino - Robert De Niro encounter 40 years later in 'Heat' in 1995. The Nathan Detroit (Sinatra) half is more indebted to writer-director Joseph Mankiewicz's source, Damon Runyan's tales of lovable streetwise crooks (every 'ethnic' tic of New York speech and behaviour lovingly exaggerated). Nathan's long-suffering dame, Adelaide leads to amusing material about their fraught path to the altar, such as 'Adelaide's Lament' in Frank Loesser's colorful score.

But - although the more conventionally polished, show-stopping group numbers like'Luck Be a Lady' and Stubby Kaye's 'Sit Down, You're Rockin' the Boat' are the ones Broadway devotees remember best - it is in the more romantic, Sky-Sarah half that the film really soars, Mankiewicz for once overcoming his screen talkiness. The songs 'If I were a Bell' and 'I'll Know When My Love Comes Along' are glorious swellings of amorous emotion, and Mankiewicz surrounds them with a wonderful mise-en-scene of comings and goings, attractions and repulsions between these two beautiful people.

After many complications the movie of course ends happily with a street double wedding with Sky and Sarah, and Nathan and Adelaide (who is given away by Lieutenant Brannigan) tying the knot, and leaving everyone with a 'feel-good' feeling.