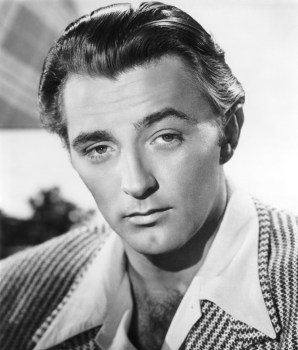 
Robert Mitchum was one of Hollywood's foremost actors in the 1940's and 1950's, appearing in a wide variety of genres from light comedy to Westerns. Today he is largely remembered for his leading roles as an anti-hero in movies of the 'film noir' style, and for his startling portrayal of Harry Powell, the terrifying false preacher in 'Night of the Hunter' in 1955.

He had a unique, instantly recognisable screen presence, naturally charismatic, appearing at times to be slow and lazy and at other times to be sharp, witty and sophisticated - often in the same role. He was versatile enough to successfully make the transition to television later in his career and he appeared in the highly popular series 'The Winds of War' in 1983 and 'War and Remembrance' in 1988.

For his performance in 'Story of G.I. Joe' in 1945 Mitchum received his only Academy Award nomination, for Best Supporting Actor. He was placed at number 23 on The 50 Greatest Screen Legends by the American Film Institute.

He was born Robert Charles Durman Mitchum on August 6, 1917, in Bridgeport, Connecticut. His father died in a railyard accident when he was 2 years old. His mother married an English Naval officer and Robert and his elder sister and younger brother were brought up by his mother and stepfather.

Mitchum was a mischievous child, often in trouble for joking and fighting. He lived with his grandparents in Felton, Delaware, from the age of 12 in 1929 but was expelled from his school there. He went to live in New York with his sister, Juliet and attended Haaren High School, but again his misbehaviour got him expelled. He left his sister's home and ran wild to the point of delinquency.

He spent several years 'riding the rails', travelling the country on railroad cars and taking whatever work he could find, including ditch digging and professional boxing. In 1932 he was arrested in Savannah, Georgia and put on a chain gang, but escaped and went back to riding the rails.

In 1936 Mitchum moved to Long Beach, California and lived with his sister, Julie. It was Julie who persuaded her brother to go to the local drama group, the Players Guild of Long Beach. For a few years this was the dramatic home of the future Hollywood star who earned pin money there as an occasional scenery mover and walk-on bit player.

In 1940 he married Dorothy, his childhood sweetheart, and after the birth of their first child, Jim, he recognised the need to settle down and he got a machinist's job at the nearby Lockheed Aircraft factory but had to quit after suffering bouts of temporary blindness caused by job stress.

In 1942 he began to obtain roles as an extra in the Hopalong Cassidy series as well as other 'B' films, mainly Westerns or War films, and he appeared in dozens during the next two years, mainly uncredited. Typical of the genre were 'Hoppy Serves a Writ' and 'Lone Star Trail' in 1943 and the propaganda film 'Mr. Winkle Goes to War' in 1944.

In one of his movies in 1944, 'Thirty Seconds Over Tokyo', starring Spencer Tracy, Mitchum made a strong impression, and was given a seven year contract with RKO Pictures. He was given a bigger role in the Western 'Nevada' later in the year, and in 1945, on loan from RKO to United Artists, he appeared in 'The Story of G.I. Joe', a film which followed the life of Mitchum, playing an ordinary G. I., through the eyes of a journalist, played by Burgess Meredith. The movie was a success at the box-office and was acclaimed by the critics. Mitchum received an Oscar nomination for Best Supporting Actor and instantly achieved star status.

After a brief stint in the Army Medical Corps, Mitchum completed two more films, 'West of the Pecos', a Western, and 'Till the End of Time', a war film, before making a series of movies during the rest of the 1940's in a genre at which he would excel - film noir.

Most of the 'noir' films are crime or gangster based and his first successes were 'The Locket' in 1946, and 'Pursued' the following year. 'Crossfire', also released in 1947, includes themes of anti-Semitism and the failings of army training. The film, directed by Edward Dmytryk, received five Academy Award nominations and, combined with his next movie, the powerful noir classic 'Out of the Past' propelled Mitchum into the superstar status.

Mitchum's rugged antisocial, anti-hero persona was enlivened by a real-life pot-possession bust in September, 1948. After serving a week in the county jail, Mitchum then spent over a month at a Californian prison farm. The conviction was later overturned by the Los Angeles court and District Attorney's office in 1951. Despite this, or maybe because of it, Mitchum's next films, 'Rachel and the Stranger', and 'The Red Pony ', in 1948 and 1949's 'The Big Steal' were all top box-office successes.

Mitchum attained the pinnacle of his stardom during the 1950's, although, even during this decade of success, the films were seldom as riveting as the man himself.

After another 'noir' film 'Where Danger Lives' in 1950 he acted as leading man during the early 1950's to a succession of beautiful actresses such as Jane Russell in 'Macao', Linda Darnell in 'Second Chance', Jean Simmons in 'Angel Face' and Ava Gardner in 'My Forbidden Past'. 1952 saw Mitchum free of his RKO contract and he was freelancing when he appeared with Marilyn Monroe, in 1954's 'River of No Return' which was a major box-office hit and even that was outshone the following year by 'Not as a Stranger', which was one of 1955's biggest hits.

1955 also saw the release of 'The Night of the Hunter', the movie in which Mitchum gives what is generally regarded as his greatest performance. It was the only film directed by actor Charles Laughton, and Mitchum starred as Harry Powell, a psychotic criminal posing as a preacher. It is a compelling and chilling drama which was, strangely, panned by the critics on first release but is now regarded as a landmark film of the decade, and Mitchum's performance has gained in stature in the years since then.

After several forgettable, run of the mill movies, Mitchum starred in 1957 with Deborah Kerr in the John Huston-directed 'Heaven Knows, Mr. Allison', showing a gentler side to his acting abilities, and for which he was nominated for a BAFTA Award for Best Foreign Actor.

In 1960 he was named best actor of the year by the National Board of Review, first for 'The Sundowners', again with Deborah Kerr, and then for 'Home from the Hill'. He gave another powerful performance as the psychopathic ex-con in the original 'Cape Fear' in 1962 and played a notable role in 'The Longest Day' in the same year but for most of the 1960's he appeared in mediocre, forgettable movies which rarely used his unique screen presence to its fullest.

The 1970 David Lean film 'Ryan's Daughter' saw Mitchum in a new type of role as a mild-mannered schoolteacher in Ireland at the start of the Troubles. He was originally one of the favorites for an Academy nomination for Best Actor and although the movie was nominated for four Academy Awards (winning two) Mitchum missed out.

He continued to make some good movies. He gave a superb performance in 1973's 'The Friends of Eddie Coyle' and he was ideally suited to play private eye Philip Marlowe in 'Farewell, My Lovely' which was a big hit in 1975.

In the 1980's Mitchum followed some of his contemporaries by moving to television. He was the star of the mammoth mini series 'The Winds of War' in 1983 which became the most watched TV program in history. He followed it up 5 years later with the less successful 'War and Remembrance'. There followed some more very average movies, and more TV, including commercials.

In 1991 the National Board of Review of Motion Pictures presented him with a lifetime achievement award and in 1992 he won the Cecil B. DeMille Award from the Golden Globe Awards.

Robert Mitchum died on July 1, 1997, in Santa Barbara, California, from lung cancer and emphysema. He was 79 years old.

1946
Till the End of Time
Undercurrent
The Locket

1947
Pursued
Crossfire
Desire Me
Out of the Past

1948
Rachel and the Stranger
Blood on the Moon

1951
My Forbidden Past
His Kind of Woman
The Racket

1952
Macao
One Minute to Zero
The Lusty Men
Angel Face

1957
Heaven Knows, Mr. Allison
Fire Down Below
The Enemy Below

1959
The Angry Hills
The Wonderful Country

1962
Cape Fear
The Longest Day
Two for the Seesaw

1969
Young Billy Young
The Good Guys and the Bad Guys

1973
The Friends of Eddie Coyle