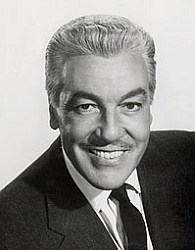 Cesar Romero was a Cuban film and television actor, who, after many years playing Latin lovers in musicals and romantic comedies, achieved fame for his portrayal of The Joker in the 1960s television series 'Batman'. He also achieved success in the 1950's with his portrayal of the bandit, The Cisco Kid and then, in the later stages of his career, as a bumbling, likeable villain in a string of Walt Disney comedies.

He was a talented and versatile performer and he successfully played a great variety of roles in a long career that formed a link between the early years of the Hollywood studio system and the modern TV dominated entertainment world.

Cesar Romero was born on February 15, 1907, to Cuban parents in New York City. After schooling at Collegiate and Riverdale County Schools he became a professional ballroom dancer appearing in nightclubs and theaters in New York. He began appearing as a dancer on Broadway and then as an actor and his early stage appearances from 1927 included 'Social Register', 'Stella Brady', and 'Lady Do'. He attracted attention from Hollywood and was signed to a short term contract by MGM.

He made his screen debut in 1933 in 'The Shadow Laughs' and he was stereotyped initially as a Latino gigolo or gangster, usually in supporting roles, as in 'The Thin Man' in 1934 with William Powell and Myrna Loy, and 'Hold 'Em Yale' in 1935. He changed studios to Universal and continued in similar roles in a number of projects ranging from poorly received flops like 'The Devil is a Woman' in 1935 to successful comedies like 'Love Before Breakfast' in 1936.

In 1937 he changed studios again after salary negotiations with Universal broke down, and he moved to 20th Century Fox with whom he stayed for the remainder of his career. Between 1939 and 1941 he made a name for himself starring as The Cisco Kid in a series of six Westerns. In the early 1940's he reverted to the Latin lover in films such as 'Dance Hall' and 'Week-End in Havana' in 1941 and 'Springtime in the Rockies' the following year.

After 3 years in the U.S. Coast Guard during WWII he returned to acting once more in 1947 in a supporting role in the musical 'Carnival in Costa Rica' followed in the same year by a rare starring role as the Spanish explorer Hernan Cortes in 'The Captain from Castile', with Tyrone Power.

He received good reviews in another supporting role in 1948 in 'Julia Misbehaves' and then appeared in a succession of forgettable 'B' movies during the early 1950's. In 1956 he appeared in an all-star cast in 'Around the World in 80 Days' and again in 1960 he was in exalted company in 'Ocean's Eleven', featuring Dean Martin, Frank Sinatra, and Sammy Davis Jr.

Romero moved to TV when he starred in the series 'Passport to Danger' in 1954 and continued to appear in a variety of supporting roles in movies. He achieved great fame in 1966 when he took on the role of "The Joker" in the highly successful TV series "Batman" and repeated the role in the 1966 movie. His 'Batman' appearances were just a small part of his TV work at this time. He had already appeared as guest-star in many shows including 'Rawhide' in 1959, '77 Sunset Strip' in 1958, and 'Zorro' in 1957 and during the 1970s, he played the role of Freddie Prinze's father on the NBC comedy series 'Chico and the Man'.

He continued his TV success with a recurring role in the western spoof series 'Alias Smith and Jones', and appearances in 'Fantasy Island' in 1978 and 'Murder, She Wrote' in 1984.

In addition to his late-career TV work Romero continued appearing in movies and became a favorite of children with his portrayal of the inept villain A.J. Arno in three Disney comedies: 'The Computer Wore Tennis Shoes' in 1969, 'Now You See Him, Now You Don't' in 1972, and 'The Strongest Man in the World' in 1975. His appeal continued into his seventies and in 1981 he appeared in 'Falcon Crest' as Peter Stavros from 1985 to 1987.

Despite being linked with several women and depite his Latin lover reputation, Romero never married and was in fact homosexual.

He retired from acting in 1990 but continued working, hosting classic music programmes on cable TV.