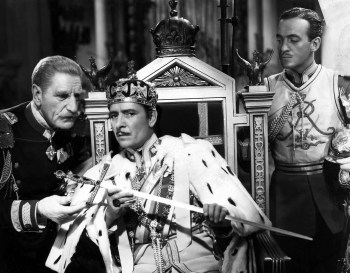 'The Prisoner of Zenda' is a classic swashbuckling adventure film made in 1937, directed by John Cromwell and starring Ronald Colman, Madeleine Carroll and Douglas Fairbanks, Jr. There is a strong supporting cast including C. Aubrey Smith, Raymond Massey, David Niven and Mary Astor.

The movie is one of numerous film adaptations of the 1894 novel by Anthony Hope, and is generally regarded as the definitive version. It received Academy Award nominations for Best Art Direction for Lyle Wheeler and Original Music Score for Alfred Newman, and was selected for preservation in the National Film Registry by the United States Library of Congress.

Search Amazon for 'The Prisoner of Zenda'

Ronald Colman plays Rudolf Rassendyll, an Englishman who is an identical look alike to his distant cousin, the King of Ruritania. Whilst on holiday in Ruritania, Rudolph is asked to impersonate his cousin at his coronation. Many complications ensue, not least with respect to the King's bride-to-be, Princess Flavia, played by Madeleine Carroll. There are plots and counter-plots involving two very satisfactory stage villains, the King's brother, Prince Michael, played by Raymond Massey and his dashing henchman, Rupert of Hentzau, played by Douglas Fairbanks , Jr.

Anthony Hope's popular original novel was performed on the West End stage in 1895 and was revived several times on stage over the next two decades, including a musical version . The first movie version was in 1913 followed by a second in 1922. Producer David O. Selznick knew the value of a good story and also of a good sequel. Hope's second most popular novel was 'Rupert of Hentzau' published two years after 'The Prisoner of Zenda' and there is little doubt that a movie sequel was intended by Selznick, particularly bearing in mind Rupert's final words in the movie as he escapes through a window,"He who fights and runs away may live to fight another day."

The 1937 version was the first in sound and it remains the version remembered by most people. In 1952 it was remade with Stewart Granger in the Ronald Colman role but failed disappointingly, despite, or perhaps, because of, using a virtually identical screenplay. A 1979 parody starring Peter Sellers also flopped.

In 1937 Britain, to resounding worldwide publicity, King Edward VIII had just abdicated, in order "to marry the woman I love", and his brother was about to be crowned King George VI. The parallels with the 'Zenda' story were obvious and irresistible to Selznick.

Director Selznick originally intended Frank Borzage to direct, but Warner Bros. refused to loan him out so Selznick turned to John Cromwell, who had directed the impressive 'Of Human Bondage' in 1934. Cromwell and Selznick argued constantly over the script and towards the end of the shoot Selznick brought in W.S.Van Dyke to restage the fencing scenes, although Cromwell's name was retained on the credits. He also brought in George Cukor to shoot a few retakes.

The cast is almost a Who's Who of the top English acting talent in Hollywood before the war.

Ronald Colman (1891-1958)
Colman was an English actor who began his film career in silent movies but who achieved great fame and popularity after the advent of Sound, and became one of the foremost leading men of the 1930's and 1940's. He starred in a number of classic films such as 'A Tale of Two Cities' in 1935 and 'Lost Horizon' in 1942, and was nominated four times for the Academy Award for Best Actor, winning for his performance in 'A Double Life' in 1947.

]Madeleine Carroll (1906-87)
was an English actress who made her name as the first of Alfred Hitchcock's cool blonde heroines in 'The 39 Steps' in 1935. She was extremely popular in the late 1930s and became the highest paid actress in the world in 1938. She is fondly remembered for her decision to retire from acting after the death of her sister from a London wartime bomb and for devoting her life to helping servicemen and children wounded or displaced by the war.

David Niven (1910-83)
Niven was an English actor and raconteur of immense natural charm who moved to Hollywood in 1934 and who made his breakthrough in 'The Prisoner of Zenda'. He became well known as a fine comic actor and for portraying a genteel Englishness in movies such as 'A Matter of Life and Death' in 1946 and 'Around the World in 80 Days' in 1956. He won an Academy Award for Best Actor for his performance in 'Separate Tables' in 1958. Later in his career he became well known as a novelist with the bestselling autobiographical novels, 'The Moon's A Balloon' and 'Bring on the Empty Horses'.

Douglas Fairbanks, Jr. (1909-2000)
As the son of a great star Douglas was surrounded from boyhood by legendary names. He had Mary Pickford as a stepmother, Marlene Dietrich as a lover, was briefly married to Joan Crawford, and even featured in a British Government sex scandal of the 1960's. He was a much decorated genuine WWII hero and he made more than 100 films, starting at age fourteen. He was undoubtedly multi-talented but he never seemed to quite shake off the shackles of being the son of a famous man.

Raymond Massey (1896-1983)
Massey was a Canadian-born stage and movie actor who had a long and distinguished 50 year career. He began as a significant presence in the British cinema of the 1930's, particularly in his work for Alexander Korda, and then became well known in Hollywood during the 1940's for appearances in such films as 'Abe Lincoln in Illinois' in 1940 for which he was nominated for an Academy Award for Best Actor, and 'Arsenic and Old Lace'. In his later career he achieved his greatest fame on television, starring as Dr. Gillespie on 'Dr. Kildare'.

C. Aubrey Smith (1863-1948)
He began his acting career in 1895 after a successful career as a professional cricketer, once playing for England in a Test match against South Africa. After moving to Hollywood in the 1920's Smith became a successful character actor specialising in English officer and gentleman roles, as in 'The Prisoner of Zenda'.