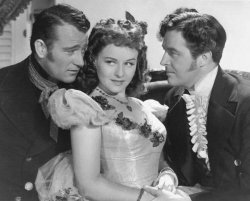 
'Reap the Wild Wind is a dramatic adventure film made in 1942, directed by Cecil B. de Mille and starring John Wayne, Ray Milland, Paulette Goddard and Susan Hayward. It is a swashbuckling naval adventure, full of spectacle and excitement, set in the mid-nineteenth century and based on a serialized story written by Thelma Strabel and published in the Saturday Evening Post in 1940.

The movie was enthusiastically received both by the critics and by the public and was nominated for three Academy Awards, winning the Oscar for Best Visual Effects and losing out for Best Art Direction (Hans Dreier, Roland Anderson, George Sawley) and Best Cinematography.

The plot concerns a love triangle set in the Florida Keys in the 1840's where piracy reigns. A rare female ship salvager, played by Paulette Goddard, falls in love with a ship's captain, played by John Wayne, and faces an unscrupulous rival (Raymond Massey) who may be sabotaging ships. Near the end there is a highly unlikely, but nevertheless, spectacular and utterly riveting underwater battle in which a giant squid kills John Wayne, thereby allowing Ray Milland to eventually win Goddard.

The movie is unusual in that it shows John Wayne playing a less than scrupulously honest character. It is also one of only eleven movies in which Wayne's character dies. Paulette Goddard got her part after narrowly missing out on the Scarlett O'Hara role in 'Gone With the Wind'. The movie is also notable for the final appearance by Hedda Hopper as an actress in a major role.