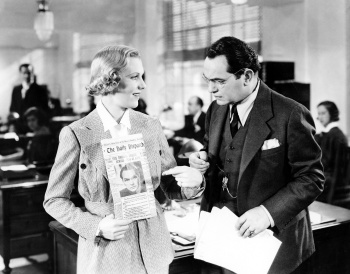 
'The Whole Town's Talking' (UK title 'Passport to Fame') is a screwball comedy with dark undertones, based on mistaken identity. It was made in 1935, directed by John Ford and stars Edward G. Robinson playing two roles and Jean Arthur as his love interest.

Edward G. Robinson plays Arthur Jones, a mild-mannered, hard-working clerk who has the misfortune to be the double of a notorious gangster and bank robber, 'Killer' Mannion, also played by Robinson. The resemblance causes all sorts of mix ups when the gangster decides to use it to his advantage. The timid clerk undergoes many humiliations but, in the end, the worm will turn…...

The humour of the movie is refreshing and enjoyable and the comedy of character is heightened and exaggerated by the portrayal of the police as incompetents who go to incredible lengths to capture the gangster.

Edward G. Robinson had made his name playing gangster roles in movies such as 'Little Caesar' in 1931. The screenplay of 'The Whole Town's Talking' was adapted from a novel by William R. Burnett, who was also the author of 'Little Caesar' and Robinson was not pleased to learn that Warner Bros. had loaned him out to Columbia to play another gangster. He changed his mind after reading the screenplay by Jo Swerling and Robert Riskin, and he also enjoyed an excellent working relationship with co-star Jean Arthur and with director John Ford.

As well as the first class performance from Edward G. Robinson, there is a bright, individualistic performance from Jean Arthur in the movie which showed her ability as a comedienne. The following year her fame became permanent when she appeared in Frank Capra's classic 'Mr. Deeds Goes to Town'.