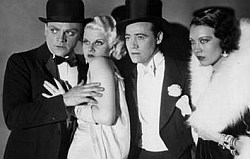 
'The Public Enemy' is a landmark American crime movie made in 1931, directed by William Wellman and is the greatest of the early 1930's gangster films. It stars James Cagney in his fifth screen appearance, in the role that propelled him to stardom and there is a splendid supporting cast including Jean Harlow, Edward Woods, Joan Blondell, and Mae Clarke.

The film's screenplay by John Bright and Kubec Glasmon, was based upon their novel 'Beer and Blood' and received the film's only Academy Award nomination, for Best Original Screenplay. In 1998 'The Public Enemy' was selected for preservation in the United States National Film Registry by the Library of Congress as being "culturally, historically, or aesthetically significant".

Search Amazon for 'The Public Enemy '

The movie is a fast-moving, melodramatic chronicle of the rise and fall of gangster Tom Powers (James Cagney) who, after a childhood in the Chicago slums, rises swiftly through the criminal underworld of prohibition-era America.

Powers and his friend Matt, turn at an early age to petty crime, graduating as young men to armed robbery and the murder of a policeman. Later Powers becomes a fully fledged gangster, involved in bootlegging during the Prohibition era and making real money for the first time. Though his family beg him to go straight, Tom continues his rise to power in the gang, but after being badly wounded in a gang war battle with rivals, he agrees to rejoin his family. He is taken from the hospital and murdered, his body dumped on the doorstep of his family home.

With its simplistic moralism, the plot of 'The Public Enemy' has dated poorly. But Cagney remains powerful and energetic as Powers, dominating the screen in every scene, typecasting him and setting the pattern for all gangster films to come, including 'The Godfather' series. Wellman directs the film with a strong visual sense, designing unforgettable scenes such as one in which Powers, in a sudden fit of anger, shoves a grapefruit into the face of his girlfriend Kitty, played by Mae Clarke.

'The Public Enemy' was released before the censorship codes were strictly enforced and its realism and violence and sympathetic portrayal and even glamorisation of ruthless criminals prompted the institution of the Production Code Administration to supervise dubious moral values in Hollywood films.

The original casting of the movie had Edward Woods as Tom Powers with Cagney assuming the subordinate role, but director Wellman wisely decided that Cagney, shorter and less refined than Woods, was more effective in the role, and switched the two actors. A smart move on Wellman's part, who made 'The Public Enemy' one of the true classic crime dramas, still worth watching today.