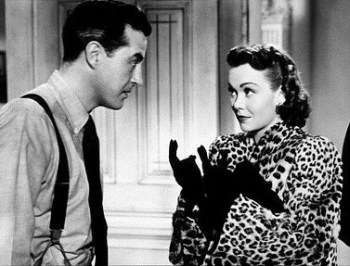 
'The Lost Weekend' is a classic movie drama made in 1945 starring Ray Milland and Jane Wyman and was the fourth movie directed by Billy Wilder. Adapted from the 1944 novel of the same name by Charles Jackson, it recounts the life of a writer in New York over the last half of a six year period and particularly during an alcoholic binge of almost 5 days. He has a severe alcohol problem and the movie pulls no punches in depicting it.

Search Amazon for The Lost Weekend

The film received seven Academy Award nominations and won four: Best Picture, Billy Wilder as Best Director, Ray Milland as Best Actor, and Wilder and Bracket for Best Script. Its other three nominations were John F. Seitz for Best Cinematography, Black-and-White, Miklós Rózsa for Best Original Music Score, and Doane Harrison for Best Film Editing. In addition it was the first movie to win both the Best Picture Oscar and also win the Cannes Film Festival's top prize, now known as the Palme d'Or. In 2011, the Library of Congress added the movie to its National Film Registry as being of cultural, historic or aesthetic significance.

Before 'The Lost Weekend', drunks in Hollywood movies were mostly figures of fun and of farce, as in 'The Thin Man' series - lovable buffoons uttering slurred witticisms. Billy Wilder and his regular co-screenwriter, Charles Brackett, dared to do something different, creating American cinema's first socially aware, intelligent, unsparing look at the grim degradation and personality-warping power of alcoholism. Even today, some of the scenes are almost too painful to watch.

Ray Milland, in a career-defining role that netted him his first Oscar, plays a New York writer, Don Birnam, struggling with and finally succumbing to his craving for alcohol, over the space of one long, parched summer weekend in the city. Even the love of his girlfriend, Helen, played by Jane Wyman, is not enough to stop the Don's descent into an alcoholic nightmare. Just as he had done with Fred McMurray in 'Double Indemnity' in 1944, Wilder seeks out and avidly exploits the insecurity behind Milland's bland screen persona. Rather than letting us stand back and judge in detached compassion, Wilder pulls us along with Birnam on his downward spiral. We're obliged to accompany him as he sheds all his remaining moral scruples, showing himself ready to lie, cheat, and steal to get money for drink, until with awful inevitability he ends up in the hell of a public hospital's alcoholics ward, screaming in horror at the hallucinations of delirium tremens.

In one unforgettable sequence the writer, reduced to trying to hock his typewriter to raise funds for booze, traipses the dusty length of 3rd Avenue dragging the heavy machine-only to realize that it's Yom Kippur and all the pawnshops are closed. Even more harrowing is the scene in a smart nightclub where Birman succumbs to temptation and tries to steal money from a woman's handbag-only to be caught and humiliatingly thrown out while the club pianist leads the clientele in a chorus of 'somebody stole her purse' (to the tune of 'Somebody Stole My Gal').

Paramount Pictures paid $35,000 in early 1945 for the rights to adapt Charles Jackson's autobiographical novel into a movie. It proved to be a very profitable project for Paramount but at one stage, after a discouraging preview screening in Santa Barbara, the studio was going to write it off as a total loss intending never to release it. Only after another preview in London in October 1945 when the picture became a sensation, did the studio release it in America.

Parts of the film were shot on Manhattan locations, and Wilder makes the most of the dry, sun-bleached streets, shot by his director of photography John F. Seitz to look bleak and tawdry, as if through Birnam's bleary, self-loathing gaze.

P.J. Clarke's saloon bar on New York City's Third Avenue, was reconstructed down to the finest detail at Paramount's studio. Nevertheless real whisky was not used in the movie but was replaced by iced tea in order to avoid genuine intoxication on set. Miklós Rózsa's score makes masterly use of the theremin, one of the earliest uses of electronic music, whose eerie swooping tone perfectly conjures up Birnam's woozy, out-of-control vision of the world.

The strictures of the Hays Code imposed a rather forced upbeat ending, though Wilder and Brackett managed to sidestep anything too mindlessly reassuring. Even so, Paramount was convinced the movie was doomed to failure, with an alarmed liquor industry offering the studio $5 million to bury it altogether. Prohibitionists, on the other hand, were up in arms, claiming the film would encourage drinking. In any event, 'The Lost Weekend was a major critical and commercial hit. "It was after this picture," Wilder noted, "that people started taking me seriously."

There are movies depicting alcoholics and their struggles in alcoholism rehabs that sometimes get it right, but other films get it completely wrong. No subsequent film on alcoholism, or any other form of addiction, has been able to avoid a nod to 'The Lost Weekend.'

Both José Ferrer and Cary Grant were considered for the lead role. 'The Lost Weekend' was Ray Milland's breakthrough film after a career spent in light leading man roles, and his performance is first rate - particularly as he resists the temptation to ham it up with a stereotypical drunks swaying walk or slurred speech. He makes the nightmare of Don Birnam believable as the desperation and self-loathing of a true addict are written in his every gesture and facial expression.

He is supported by a strong cast. Jane Wyman was Wilder's third choice for the role of Helen, Don Birnam's faithful girlfriend, behind the established leading ladies, Katharine Hepburn and Jean Arthur, but she made the most of her opportunity and showed that she had the talent for serious dramatic roles.