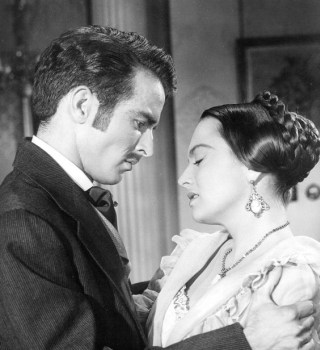 
'The Heiress' is a spellbinding, drama film made in 1949, directed by William Wyler and starring Olivia de Havilland, Montgomery Clift, and Ralph Richardson.

The movie was critically well received on release although its box-office performance was poor, particularly in comparison to Paramount's other major film of 1949, 'Samson and Delilah', which was an enormous commercial success. However it has since come to be regarded as a classic.

The whole production oozes class from start to finish, underlined by Aaron Copland's evocative score. The movie's success comes from sharp, meticulous direction by William Wyler with his trademark long takes and masterful lighting and camera techniques, combined with outstanding acting from the principals.

Olivia de Havilland plays Catherine Sloper, a shy, naive young woman who lives with her father, Dr. Austin Sloper, played by Ralph Richardson, in mid-19th century New York. The father constantly compares Catherine unfavorably to her dead mother. When a handsome, but poor man, Morris Townsend, played by Montgomery Clift, falls in love with Catherine, Dr. Sloper believes that he can only be after her inheritance. His widowed sister Lavinia Penniman, played by Miriam Hopkins, helps the young couple, and important life lessons are learned by all concerned.

The original Broadway play "The Heiress" by Ruth and Augustus Goetz, on which the film was based, opened at New York's Biltmore Theater in September, 1947. It ran for 410 performances. The play, in turn, was based on the Henry James's 1880 novel 'Washington Square'.

The Goetzes sold the play's film rights to Paramount for $250,000 with the promise of $10,000 a week to write the movie screenplay. The movie was originally intended to be produced by Liberty Films, an independent production company headed by a partnership which included William Wyler, but when the company was taken over by Paramount in 1948, the studio took on the production of the film.

Olivia de Havilland, after seeing the Broadway play, approached Wyler about adapting it for a screen version which would feature her in the lead role. Her faith was well placed and and she gave one of her best performances under his direction.

The Goetzes were anxious that the plot of the film should be faithful to the play. Wyler requested only that they cut some lines early in the movie, to make Townsend less obviously a fortune hunter. Wyler wanted to maintain some audience suspense on that issue, claiming that it was closer to James' original. The studio also wanted to get the maximum effect of Clift's reputation as a romantic leading man.
Casting
Cary Grant was interested in playing Morris Townsend but was turned down by the studio. Wyler had originally been keen on Errol Flynn in the role, reuniting him with his long time movie partner, Olivia de Havilland.

Olivia de Havilland manages to portray a plain, gauche, girl marked as a spinster despite the considerable fortune she will inherit. When she is jilted by the fortune-hunting wastrel played by Montgomery Clift, she makes a compellingly believable transition to effect a bitter revenge upon Clift in the final scene.

Montgomery Clift did not impress the Goetzes on set and they complained that his carriage was not sufficiently upright for a man of the period. Wyler made Clift spend weeks learning nineteenth century social dances to help him develop the correct posture.