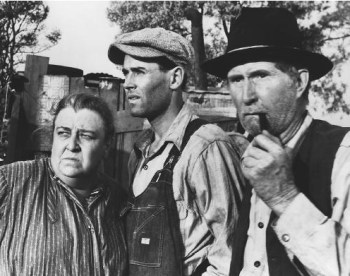 
'The Grapes of Wrath' is a dramatic film made in 1940, directed by John Ford and starring Henry Fonda, Jane Darwell, John Carradine and Russell Simpson. It was based on John Steinbeck's controversial 1939 Pulitzer Prize-winning novel of the same name, the title of which comes from the hymn, "Battle Hymn of the Republic", by Julia Ward Howe. ("Mine eyes have seen the glory of the coming of the Lord, He is trampling out the vintage where the grapes of wrath are stored).

Although unconventional, the movie is without doubt a classic. It is one of the few movies of the time that dealt with the national disaster that was the Great Depression, a subject that Hollywood in general tried to avoid, and it contains memorable performances, from Henry Fonda and Jane Darwell in particular.

The movie was a great success critically and also commercially, becoming one of Fox's biggest earners of 1940. It was nominated for a total of seven Academy Awards, winning two, for Best Director (John Ford) and Best Supporting Actress (Jane Darwell). On the American Film Institute's list of top 100 Movies it is ranked at number 23.

Search Amazon for 'The Grapes of Wrath'

We first meet Tom Joad, played by Henry Fonda, on his way back to his family after serving time in jail. He soon discovers that the hard life does not end on release from prison. He finds his family evicted from their homestead by a combination of natural forces - harsh droughts and dust storms - together with cruel human intervention from callous city financiers. The whole plot of the movie revolves around this one representative sharecropping family, the Joads who join a migration to California with other Okies. Their adventures and appalling treatment along Route 66 and on their arrival are recounted.

The movie is harsh and ruthless in the way it bleakly depicts the cruel treatment of the family on their long journey and we are left in no doubt that the Joads are not an isolated case but typical of the thousands of families uprooted and forced to move west to California.

The bleakness of the story is alleviated from time to time by humorous glimpses of the human side of the family, such as when the children discover flushing toilets for the first time, at the Government camp. The movie does make one significant departure from the Steinbeck novel. In the book the Joads' situation gradually gets worse until they are reduced to starvation wages. In the film the family finds the government camp much later on than in the book. It was a small but important change and enabled what had been a tragic film to end on an upbeat note, marked by Ma Joad's final speech: 'We're the people...We'll go on forever.'

Darryl F. Zanuck, the production head of 20th Century-Fox, bought the rights to Steinbeck's controversial novel for $70,000, against the advice of many at Fox. He proceeded cautiously, using the false working title, "Highway 66" for the production, and ordering only three copies of the screenplay to be made. While Steinbeck authorized screenwriter Nunnally Johnson to "tamper" with his book, Johnson added only a few new scenes, most notably the one where the Joads stop to buy a nickel loaf of bread, and the truck driver pays for it.

In 1939 John Ford had directed three magnificent movies: 'Stagecoach', 'Young Mr. Lincoln' and 'Drums Along the Mohawk'. He received the script for 'The Grapes of Wrath' while filming 'Drums Along the Mohawk' and agreed to direct it because the Joads' journey reminded him of his own family's plight in Ireland during the potato famine of the previous century. The movie was filmed at the end of 1939, within the same 12 months as the previous three, and marked the culmination and high point of a quite amazing year of cinematic creativity.

Ford made the inspired choice of cameraman in Greg Toland who was to achieve fame the following year for his work on 'Citizen Kane'. He used deep-focus photography and low-key lighting to emphasise shadows and darkness, techniques that would later inspire film noir. He used the style of the famous photographs of the government-employed Farm Security Administration to capture a documentary feel to the tragic story. This can be best seen in a sequence where the Joads drive into a squatters camp. The actors are without the usual artifices of makeup or diffusion and come across realistically as tough, uncompromising Dust Bowlers.

Zanuck and Ford cast Henry Fonda in the much-coveted role of Tom Joad with the stipulation that he star in seven other films for the studio. Beulah Bondi was Ford's choice to play Ma, but Zanuck argued for the earthy Jane Darwell, already under contract at Fox.

After only four weeks of pre-production, Ford and Gregg Toland started shooting on a tight schedule, mostly on Fox studio sets. Otto Brower's second unit traveled the Okies' route for footage of the actual sites that the original Okies had used. Zanuck wanted the sound to match the authenticity of the picture and invested in a six-man crew to drive to Oklahoma and capture the noise of a real jalopy. While those expensive effects were never used, Zanuck's choice of an accordion version of "Red River Valley" became the movie's theme song. Ford claimed he also let Zanuck direct Ma's final, uplifting soliloquy when the producer deemed Ford's original ending of Tom walking away too depressing.

The great strength of the movie lies in the gradually increasing determination and courage of each family member, particularly the son, Tom Joad and the mother as they refuse to be cowed.

It is John Ford's great achievement that he can make such ugly and traumatic subject matter, still fresh in the minds of the moviegoing public, so entertaining. He dealt sensitively with the plight of the migrant families whilst not diluting the brutality of their treatment by their fellow countrymen.and did not stint on showing the unpleasantness and callousness of some of their fellow Americans. His movie is a masterpiece, proof that the moving image can be a document of social change as well as a beautiful and engrossing work of art.

Henry Fonda (1905-1982) This was Henry Fonda's third movie for John Ford and his magnificent, utterly believable performance as Tom Joad cemented his position as one of Hollywood's major leading men, although the Best Actor Academy award went to James Stewart for his role in 'The Philadelphia Story'.
Russell Simpson(1880-1959) After beginning his career on Broadway, Simpson made his movie debut in de Mille's 1914 'The Virginian' and went on to become a familiar face in Hollywood movies for the next 45 years.
Jane Darwell (1879-1967) Jane Darwell made her movie debut in silents in 1913, and continued in films until 'Mary Poppins' in 1965, specializing in playing kind, motherly roles.Ma Joad became her most famous role for which she deservedly won the Oscar for Best Supporting Actress.
John Carradine(1906-1988) Carradine was a John Ford favorite and appeared in eleven of his films. His performance as the idealistic preacher, Jim Casy, makes the character, the film's spiritual element, come alive, and is completely believable.