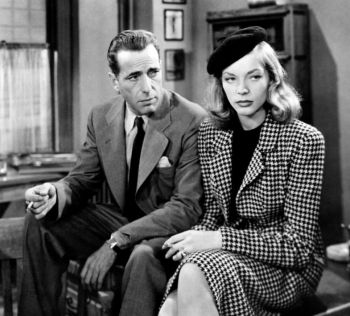 
'The Big Sleep' is one of the great films by one of the screens greatest actors and most talented directors. It is a detective mystery thriller, made in 1946, directed by Howard Hawks and starring Humphrey Bogart as detective Philip Marlowe, with Lauren Bacall and Martha Vickers. The screenplay, adapted from Raymond Chandler's 1939 novel of the same name, was by Nobel laureate William Faulkner, Leigh Brackett and Jules Furthman, and the score was by composer Max Steiner.

The film is generally regarded as a classic and was commercially successful although it received no nominations from the Academy of Motion Pictures Arts and Sciences in any of its award categories. In 1997, the film was deemed "culturally, historically, or aesthetically significant," by the U.S. Library of Congress and was added to the National Film Registry.

It is undeniably a masterpiece of film noir, with murders aplenty, unsavoury characters, chiaroscuro lighting and several femmes fatales, but lacking the conventional noir voiceover and flashback. Howard Hawks seems to film nearly every scene in the dark or in the rain, or both, and the movie is permeated with a dark, disquieting atmosphere with sleazy characters constantly coming in and out of the shadows.

The plot can be described as an intellectual challenge and is regarded as one of the most complicated of any detective movie. It concerns the wealthy Sternwood family, an aging father and two beautiful daughters, Vivian, played by Lauren Bacall and Carmen, played by Martha Vickers.

Carmen, is being victimized by a blackmailer over pornographic pictures of her, and Philip Marlowe, played by Humphrey Bogart, is hired to get rid of the blackmailer. An unexpected murder complicates matters and touches off a series of killings by a number of different parties, various double crosses and all sorts of characters appearing and disappearing. During filming none of the actors or writers knew who the murderer was. They asked the original author, Raymond Chandler and he didn't know. So don't hold your breath.

In a sense the plot is secondary to the characterizations. It is only an excuse for us to enjoy watching Humphrey Bogart again playing a tough private eye, just as he had done in 'The Maltese Falcon'. We are not watching a Philip Marlowe movie, but rather a Bogart movie.

The film is based on Raymond Chandler's 1939 novel of the same name. Warner Bros. studio chief Jack L. Warner gave Howard Hawks $50,000 to purchase the movie rights. Hawks is believed to have bought the rights for around $20,000 and kept the rest.

'The Big Sleep' was the second time that Humphrey Bogart and Lauren Bacall worked together,after the major success in 1944 of 'To Have and Have Not', also directed by Hawks.

The public clearly wanted to see them together again and although the film was completed in the beginning of 1945, there had to be additional shooting and editing, to increase the couple's on screen time, which held the release of the film for about a year and a half. The release was delayed also by the end of World War II, which influenced Warners to favour war-themed films. It is the palpable chemistry between the two that propels this movie forward with snappy, wonderful banter and smoldering tension that put the sizzle into this top thriller. In fact the couple were married within three months of the film's completion. They would work together again for the film noir 'Dark Passage' in 1947 and the classic gangster drama 'Key Largo' in 1948.

Shooting was completed on January 12, 1945, thirty-four days behind its forty-two day schedule, delayed in part by Hawks's continual re-writing.