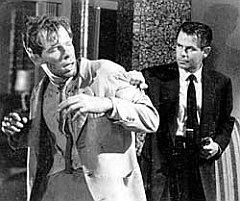 'The Big Heat' is a film noir made in 1953 by Fritz Lang and starring Glenn Ford, Lee Marvin and Gloria Grahame. It was written by a former crime reporter, Sydney Boehm and is about the revenge of a cop who takes on the corrupt mob that controls his city after his wife is blown up by a car bomb meant for him. The film has a moralistic message to push home, which is that the the forces of violence and evil can only be successfully opposed when the decent, courageous individuals in society stand together to fight them.

On its release the film was critically very well received and it did well at the box-office although it received no Academy Award nominations. It is today considered a classic, one of the great noir movies.

Search Amazon for 'The Big Heat'

Like Fritz Lang's earlier movie, the 1952 Western 'Rancho Notorious', 'The Big Heat' is a tale of 'hate, murder, and revenge'. It begins with a famous shot - a close up of a .38 gun lying on a desk and about to be used by Tom Duncan, a corrupt policeman on the take, to commit suicide, and proceeds rapidly through jolting horrors that malform the characters. Homicide Detective Dave Bannion (Glenn Ford) turns from famiy man to obsessive when his wife (Jocelyn Brando) is brutally murdered.

Moll Debby (Gloria Grahame)is embittered when her thug boyfriend Vince (Lee Marvin) disfigures her with a faceful of hot coffee and takes up Bannion's quest. In a crucial development, the embittered hero still can't commit cold-blooded murder, and so a double has to step in to pull the last thread that allows justice to be done. The film's title refers to extreme police crack-down on criminal activities and the big heat that brings down crime boss Lagana (Alexander Scourby) is precipitated when Debby confronts and murders her 'sister under the mink,' the crooked cop's grasping widow.

Grounded more in political reality than most of Lang's noirs, thanks to the hard-hitting detail of William P. McGivern's novel and Sydney Boehm's script, 'The Big Heat' is one of a 1950's cycle of syndicate-runs-the-town crime exposés - others include 'The Phenix City Story' in 1955 and 'The Captive City' in 1952.

Lang's direction of the movie is still indebted to expressionism, with settings in which the individual personality traits of the main characters are highlighted: thus the frigid luxury of the Duncan house, bought with tainted money; the tasteless opulence of Lagana's mansion, with its hideous, and all too typical, portrait of the gangster's mother and teenage party; the penthouse moderne of Vince and Debby, where the police commissioner plays cards with killers; and the minimalist hotel room where Bannion ends up, his life pared down to one objective - the need for vengeance.

It is not a conventional happy ending; after the fall of the crime syndicate, the hero returns to his desk in the Homicide Department. The welcome of workmates-expressed, of course, by an offer of coffee, is curtailed, and the end title appears over Bannion putting on his hat and coat to go out and deal with 'a hit and run over on South Street.' But at least we know the villains have been apprehended and are going to face justice.