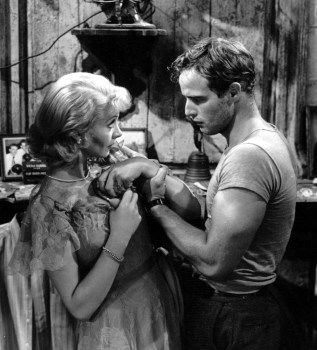 'A Streetcar Named Desire' is a classic movie drama made in 1951, directed by Elia Kazan and starring Marlon Brando, Vivien Leigh, Kim Hunter and Karl Malden. The movie was adapted from Tennessee Williams' Broadway stage play, also directed by Kazan, which ran for 855 performances from December 3, 1947.

The original play was edited to avoid controversy but the acting throughout, and Brando's performance, in particular, is immensely powerful and many of the controversial topics, such as homosexuality, lust and rape, remain.

The movie was an immediate commercial and critical success and is regarded as a cinematic masterpiece. It was nominated for a remarkable twelve Academy Awards and won four Oscars including three in the acting categories: Best Actress for Vivien Leigh (her second Best Actress Award), and Best Supporting Oscars to Kim Hunter and Karl Malden. It was the first time that both Support Acting categories were won by the same film.

In 1999, the movie was selected by the Library of Congress for preservation in the United States National Film Registry. It is currently ranked at number 47 in The American Film Institute's '100 Years... 100 Movies' listing.

Blanche Dubois, a neurotic and fragile woman played by Vivien Leigh, arrives in the French Quarter of New Orleans to stay with her pregnant sister Stella (Kim Hunter) and churlish brother-in-law, Stanley (Marlon Brando) in their cramped, sweltering apartment.

Stanley, convinced that Blanche is holding out on a mythical inheritance, is driven wild by the neurotic, fragile woman, pathetically clinging to her refinement and delusions. Under Stanley's resentful bullying, Blanche's last hopes are brutally destroyed, and she retreats into a psychotic state.

NB: The streetcar Desire Line took its name from Desire Street in the 9th Ward of New Orleans

Elia Kazan directed the Broadway production with the then unknown Marlon Brando (whom he had found at the Actors Studio) playing Stanley and Jessica Tandy as Blanche. The production won the Pulitzer Prize and the New York Drama Critics' Circle award for Best Play. The screen rights to the play were bought by independent producer Charles Feldman, but no major studio wanted to produce a film version due to the adult nature of the content. Feldman eventually produced the movie and got Warner Bros. to release it.
Vivien Leigh
Nine members of the Broadway cast repeated their roles but Warner Bros. insisted that Vivien Leigh play Blanche as she was a bigger box office attraction than Jessica Tandy. She was only 36 at the time of filming and had to be made up to look older.

She had already played Blanche in the first London production of the play, under the direction of Laurence Olivier, her husband at the time. She later said that his direction influenced her later film performance more than Elia Kazan's direction did.
Marlon Brando
For the Broadway production, several Hollywood stars had been considered for the role of Stanley Kowalski, including Burt Lancaster, Van Heflin, Edmond O'Brien and Gregory Peck. Marlon Brando was originally rejected because he was considered too young and too good looking. It was only after reading for Tennessee Williams that Brando was given the role.

Although Tennessee Williams's play was meant to be all about the desperate, poetic heroism of Blanche DuBois, Marlon Brando's uncouth, sweaty animal magnetism opposite Vivien Leigh's frail, faded belle commanded the screen, just as it had electrified Broadway theater goers four years earlier. Brando's brooding naturalism, his earthy sexuality, and his howls of "Stell-ahhhh!" remain a nearly impossible act to follow for the actors who have subsequently assayed the brutish Stanley Kowalski.

Brando was beaten to the Best Actor Oscar by Humphrey Bogart (for 'The African Queen). Nevertheless, his performance in the movie is one of the greatest in cinema history, a magnificent, electrifying portrayal of a brooding, masculine animal. The movie cemented his reputation in Hollywood, and established him firmly as an international icon. He followed it with successes like 'On the Waterfront,' 'The Wild One,' 'The Young Lions,' and 'The Fugitive Kind', and for a time during the 1950s, he was considered to be America's greatest-ever actor.

When the film was made, fitted t-shirts did not exist, so Brando's t-shirts had to be shrunk by washing and then tightened by stitching up the back, to give the right effect.

Elia Kazan worked closely with the production designer to create an authentically cramped and sordid look. The walls of Stanley and Stella's home were built in small sections that could be removed, so that, as the film progresses, the set of the apartment actually gets smaller to heighten the suggestion of Blanche's increasing claustrophobia.

The film's score, written by Alex North, was the first ever jazz-oriented film score for a dramatic picture and brilliantly reinforces and colours the the film's steamy New Orleans setting.

Although it was Kazan's seventh feature film, 'Streetcar' is theatrical rather than cinematic. Its power emanates from the performances, particularly the absorbing duel between the poignant, ethereal, classic (one might say determined), stagey Leigh and the explosive, instinctive Brando, who are as different in their acting approaches as Blanche and Stanley are in personality. Kazan who was a co-founder of the Actors Studio in 1947 and still a force in American theater at the time, was showing little interest in the visual possibilities of the medium, but his way with actors is amply apparent here and the lack of camera tricks enabled him to concentrate wholly on the story and the performances.