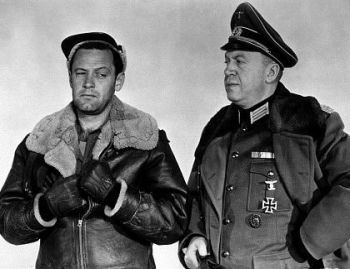 The movie is an adaptation by Billy Wilder from the stage play of the same name by Donald Bevan and Edmund Trzcinski, which ran on Broadway for 472 performances. Both Donald Bevan and Edmund Trzcinski had actually been prisoners in Stalag 17B in Austria during the war. Wilder developed and considerably changed the original script, particularly the dialogue, and was helped with the screenplay by his friend Edwin Blum.

The film was critically well received and is now regarded as a Prisoner of War classic, along with 'The Great Escape' and 'The Bridge on the River Kwai'. It was commercially successful, earning over $10 million in its first year. It received three Academy Award nominations, Holden winning the Oscar for Best Actor. Wilder was nominated for Best Director and Robert Strauss for Best Supporting Actor.

The film tells the story of a group of American airmen held in a German World War II prisoner of war camp around Christmas, 1944. The boredom and tedium of camp life is disturbed when the men begin to suspect that one of their number is a traitor. All the evidence incriminates one man, the unscrupulous Sefton, played by William Holden, but there is a clever twist in the well constructed tale.

The film retains its freshness and sharpness, even today. The acting is simply wonderful, the dialogue sharp and unexpected and the story keeps the viewer's interest. 'Stalag 17' is a great war movie, a superb mixture of mystery, comedy and drama. Billy Wilder took what could have been a monotonous, stagy story and transformed it into one of his most dramatically compelling films. It is one of his best movies, and that says a lot.

Paramount purchased the film rights to the play for $110,000. From the original Broadway production Harvey Lembeck, Robert Strauss, Robinson Stone, Robert Shawley and William Pierson reprised their roles. The movie was filmed at the studio-owned John Show Ranch in Woodland Hills, on the southwestern edge of the San Fernando Valley. Shooting began in February 1952, during the rainy season in California, which provided satisfying amounts of real mud for the camp compound.

Unusually, the film was shot chronologically, normally considered an expensive and time-consuming process. Members of the cast said that they themselves did not know the identity of the informant until the last three days of shooting.

The film was banned in Germany until 1960 when it was allowed to be shown with an opening disclaimer advising the audience that the depicted prison camp was "not typical...but only one example". Spain banned the film until 1964.

Wilder's original choice for the part of Sefton was Charlton Heston, and Kirk Douglas was also considered for the role. Third choice Holden made the most of his opportunity although he did not like the part of Sefton as written, thinking him too selfish. The role gave his career a timely boost and made him one of Hollywood's most sought-after actors.

For such a dramatic and potentially tragic story there is a considerable amount of humor, particularly from the duo of Robert Strauss as "Animal", obsessed with Betty Grable, and Harvey Lembeck as Stosh's best buddy Harry Shapiro. There are many fine performances from the all-male cast including Richard Erdman as Hoffy, Neville Brand as Duke, Peter Graves as the blonde-haired Price, Gil Stratton as Sefton's buddy Cookie (who also functions as film narrator) and Robinson Stone as the tragic, shell-shocked Joey.