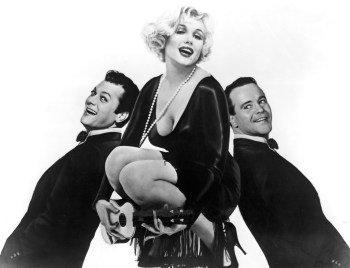 
'Some Like It Hot' is an exceptional film comedy made in 1953, directed by Billy Wilder and starring Marilyn Monroe, Tony Curtis and Jack Lemmon. From its first release it has been hailed a classic and it is undoubtedly one of the most brilliant comedy movies to have ever been made. It is extremely funny, beautifully acted by a talented cast and directed with a very sure hand by one of the most incisive minds in Hollywood, Billy Wilder.

The movie received six nominations for Academy Awards but won only one, for Best B/W Costume Design, in a year, 1959, when it went head to head against the record-breaking Oscar winner, 'Ben Hur'. It was placed at number one in the American Film Institute's list of Best Comedy films of All Time and in 1989, it was selected for preservation in the United States National Film Registry by the Library of Congress as being "culturally, historically, or aesthetically significant." and in 2007 it was placed at number 22 in their list of Greatest films in any genre. In short, it is quite a film.

The plot revolves around two jazz musicians Joe and Jerry (Tony Curtis and Jack Lemmon), struggling to make a living in Prohibition-era Chicago. They inadvertently become witnesses to the St. Valentine's Day Massacre and have to find a way to disguise themselves whist they find a way out of the city before the Chicago gangsters, led by 'Spats' Columbo (George Raft) find and kill them.

They flee, disguised as women, calling themselves Josephine and Daphne, in an all-girl band, Sweet Sue's Society Syncopators, bound for Miami. Both are taken with Sugar Kane Kowalczyk (Marilyn Monroe), the band's sexy but vulnerable singer and ukelele player and they try to fight for her affections whilst still maintaining their disguise. But Jerry, as Daphne, attracts the persistent attentions of lecherous playboy, Osgood Fielding III (Joe E. Brown), and thing get even more complicated, and funny, when the very gangsters the boys want to avoid, arrive at the Florida hotel for a gangland summit, honoring "Friends of Italian Opera".

The movie has justly become a comic legend. It is sensationally funny, fizzing from start to finish with great situations, cleverly crafted gags, breakneck timing, and terrific performances from a fantastic cast. Marilyn Monroe was at her most enchanting; Curtis's obvious self-consciousness in drag gives him an aloof control that is in superb comic contrast to the uninhibited, priceless Lemmon.

The film has one of the most famous last lines in movie history. It is funny because it is so unexpected; the last reaction the audience expects to Jerry's revelation "I'm a MAN!" is Osgood's philosophical shrug, "Nobody's perfect."