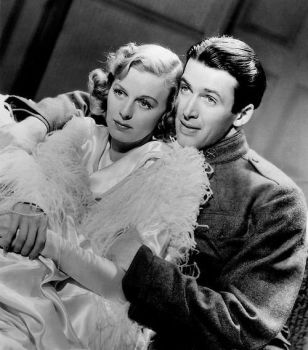 Although received less than enthusiastically by the critics, the movie was a commercial success. It earned $722,000 in the US and Canada and $320,000 elsewhere resulting in a profit for MGM of $146,000.

The film takes place in 1917 with the entry of the United States into WWI. William "Bill" Pettigrew, played by James Stewart, signs up for service, and whilst on basic training in New York, falls for beautiful shopgirl Daisy, played by Margaret Sullavan.

Daisy already has a sweetheart, Sam Bailey, played by Walter Pidgeon, and he gives the go-ahead for Daisy to show Bill around the city. They're supposed to be "just friends" but young Stewart is falling in love.

I'm not going to spoil it for you, but make sure you've got a handkerchief ready…..

The film is based on a short story written in 1918 by Dana Burnet entitled 'Private Pettigrew's Girl'. Paramount had produced a film version of the story in 1919, under its original title, and then in 1928 a second version starring Gary Cooper, Paul Lukas and Nancy Carroll under the title 'The Shopworn Angel'. This version was a great success, earning Carroll an Oscar nomination and establishing both Cooper and Lukas as leading men.

The previous versions of the film were made before the strict regulations of the Hays Code, and contained numerous sexually explicit elements. Thus screenwriter Waldo Salt had to change some aspects such as making Daisy a leading musical star rather than a brassy chorus girl and changing Sam from her gangster lover into her wealthy, high society boyfriend.

MGM bought the film rights in 1935, intending to turn it into a vehicle for their new blonde bombshell, Jean Harlow but her sudden death from uremic poisoning in 1937 required a major rethink. First Joan Crawford was announced for the lead, then Rosalind Russell. The role finally went to Margaret Sullavan, who had just signed a short-term contract with the studio.

A large part of the film's popularity stems from the Stewart/Sullavan chemistry. This was their second screen pairing following their successful teaming in the Universal Pictures production 'Next Time We Love' in 1936. It also led to two more movies together, 'The Mortal Storm' and the gentle romantic comedy 'The Shop Around the Corner', both in 1940.

Margaret Sullavan's beautiful singing voice was provided by the new Broadway musical discovery, Mary Martin.The film's soundtrack included such popular tunes as "You're in the Army Now," "Over There," "Stars and Stripes Forever," "The Darktown Strutters' Ball," and "Pack Up Your Troubles In Your Old Kit-Bag and Smile, Smile, Smile!."