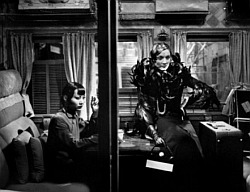 Anna May Wong and Marlene Dietrich


'Shanghai Express' is a romantic adventure movie made in 1932, directed by Josef von Sternberg and starring Marlene Dietrich, Clive Brook, Anna May Wong, and Warner Oland. The screenplay was by Jules Furthman, based on a story "Sky Over China" by Harry Hervey.

The movie was commercially very successful and was Dietrich's biggest American hit. Due to the hard economic times it was one of only a few Paramount pictures to turn a profit that year and it was also one of the top ten highest-grossing fims of 1932. It received three Academy Award nominations, losing for Best Director and Best Picture (to MGM's 'Grand Hotel') and winning the Oscar for Lee Garmes for Best Cinematography.

In the seven films he made with her, Josef von Sternberg took his obsession with Marlene Dietrich to ever more extreme lengths of intensity and stylization, until both star and story were all but subsumed in a welter of spectacle and design. 'Shanghai Express' was the fourth of the seven teamings and so, coming at the midpoint in the cycle, holds the elements in near perfect balance.

The simple storyline concerns a train journey from Peking to Shanghai, interrupted by a bandit attack. The film is pre-Code and features, not one, but two, ladies of the night or "coasters", one Western (Shanghai Lily, played by Dietrich), and the other Chinese (Hui Fei, played by Anna May Wong). When Lily is sought by the evil warlord Henry Chang, played by Warner Oland, her former lover, Captain 'Doc' Harvey, played by Clive Brook, who, improbably is also on the train, tries to save her. The story gets a happy ending when Hui Fei stabs Chang to death and Brook acknowledges his love for Lily.

The film's black and white photography by Lee Garmes is superb, particularly the scenes involving Dietrich, with her sculpted face framed in an endless series of variations of patterns of black and white, an exquisite screen on which to project a wide range of moods and emotions.

The production employed more than 1,000 extras, creating a sense of the teeming masses of China, but the entire movie was shot on soundstages at Paramount Pictures in Hollywood or at nearby Southern California locations. The China represented is uttery fictitious as when the locomotive steams out of Peking station straight down a narrow street seething with coolies, children and animals.

The supporting cast was a strong one. The wooden acting of Clive Brook, a silent film star little remembered now, seems dated and hammy and Anna May Wong has some good lines as the exotic Chinese prostitute. Warner Oland , Eugene Pallette, Louise Closser Hale as a feisty American boarding house landlady, all play their parts to the hilt, but the movie belongs to Dietrich and von Sternberg and the strange chemistry between them. Together they created a wonderfully unique movie, one of the early masterpieces of American cinema.