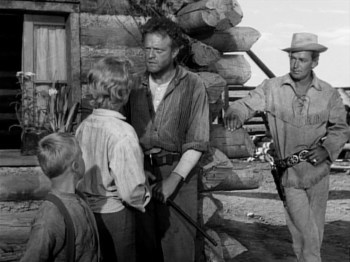 
'Shane' is an iconic, timeless Western adventure film made in 1953, directed and produced by George Stevens and starring Alan Ladd, Jean Arthur, Van Heflin, Brandon De Wilde, and Jack Palance. It has become a classic of the genre and one that no one who sees it will ever forget.

The film was a box-office and a critical hit. It received six Academy Award nominations including Best Picture and Best Director, and won one - Loyal Griggs for Best Cinematography, Color. It was ranked third on the AFI's list of 10 greatest Westerns and at number 45 in their list of Greatest Movies of All Time.

In 1993, the movie was selected for preservation in the United States National Film Registry by the Library of Congress.

Alan Ladd plays the laconic drifter in white buckskin who takes up residence as a farmhand with a simple homesteader (Van Heflin), his dutiful, wholesome wife (Jean Arthur) and son (Brandon De Wilde in a Wyoming valley. The family get mixed up in a range war as tough cattle baron Rufus Ryker, played by Emile Meyer and his men use scare tactics to to get the settlers out and seize their land. Ryker recruits an infamous gunfighter played to the hilt by Jack Palance ( dressed in black from head to toe). The scene is set for a mighty showdown between the protector, Shane, and the bad guys.

But Good triumphs, so very deeply, indeed, that Shane comes to see his own effect on this charming little family, mounts his obedient steed, and rides away at film's end. He first gently explains to Joey why he must leave and then, in an unforgettable movie ending, he rides off into a sunset that outshines all sunsets. After him runs an anguished and confused Little Joey, crying out "Come back, Shane!"

Shot at Jackson Hole, and before the days of wide screen and Dolby Stereo, Shane is studded with iconic visions. The purple Grand Tetons in the background, a deer grazing in a mirroring pool while the boy takes potshots at it with his toy rifle, the filthy sneer on the rancher's face when Starrett (Heflin) refuses to give up his land, the look in Palance's eyes when he guns the gunless Frank 'Stonewall' Torrey (Elisha Cook Jr.) down in the mud. Director George Stevens makes the mud tactile, like melted chocolate.

George Stevens's son read Jack Schaefer's novel based on Wyoming's Johnson County War of 1892 and recommended it to his father. Stevens hired author A. B. Guthrie Jr. to write the script despite the fact that Guthrie had never written any screenplays.

Schaefer's novel had been a huge success when it was first published in 1949, and Paramount swiftly snapped up the film rights.

The movie was shot completely on location in the Grand Teton mountains in Wyoming, between late July and mid-October 1951. Originally scheduled for 28 days, it actually took 75 days but was was held back until its Manhattan premiere at Radio City Music Hall in August, 1953, due to director George Stevens's editing method. He would shoot the same scene from several different angles and then spend large amounts of time editing the resulting masses of film.

Unsurprisingly. the movie went considerably over budget, increasing from just under $2 million to over $3 million.

Alan Ladd was uneasy when handling guns. The scene where he practices shooting in front of the young boy, took 119 takes to complete.

Stevens was well known for his meticulous attention to detail. Wherever possible all props were true to the period, the clothing of the actors was completely authentic and even the buildings were built to the specifications of the time. The realism continued with the sound and effect of a bullet. Every shot is magnified to sound like a mini explosion and this is one of the first movies to use stunt wires with a block and pulley system to pull the actors or stuntmen backwards to simulate when they've been shot.

The film is dotted with classic sequences which are worth seeing again and again, such as the stump being uprooted in the yard, or when Wilson struts onto the wooden sidewalk with his spurred boots ringing, the town dog is shown up close, creeping away with its tail between its legs.