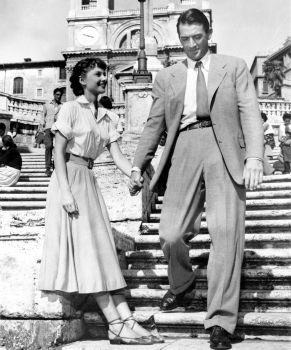 
'Roman Holiday' is a delightful romantic comedy, made in 1953, directed and produced by William Wyler and starring Gregory Peck and Audrey Hepburn, both on peak form. It is a captivating film romance in which Audrey Hepburn made her first Hollywood appearance after appearing in a few roles in Europe and in a Broadway production of Gigi. The movie catapulted her to world stardom and she quickly became a style icon whose simple yet elegant look was imitated by women the world over.

The movie was one of the biggest international hits of Hollywood and received ten Academy Award nominations, including Best Picture, Best Supporting Actor (Eddie Albert), and Best Director. It won Oscars for Best Actress (Audrey Hepburn), Best Original Story (Ian McLellan Hunter) and Best Black and White Costume Design (Edith Head). It was commercially successful and although it went considerably over its $1.5 million budget, it took $5 million in the domestic market.

In 1992, the Academy belatedly righted a serious wrong when they posthumously credited and gave an Oscar to author Dalton Trumbo, who actually wrote the screenplay, but who had been blacklisted in the 1950's as one of the Hollywood Ten, after refusing to answer questions regarding possible communist affiliations.

In 2002, the American Film Institute named 'Roman Holiday' the fourth best love story of all time on its AFI's 100 Years... 100 Passions list and in 2008 it also received fourth place in the AFI's romantic comedy genre.

In 1999, the movie was selected for preservation in the United States National Film Registry by the Library of Congress as being "culturally, historically, or aesthetically significant".

The plot is tightly constructed and contains adventurous and exciting moments as well as romance and light comedy and can also be seen as the "Cinderella" story in reverse. Audrey Hepburn plays Princess Anya, who is making a Royal European tour but who starts to feel stifled by her tight schedule and official responsibilities. One night she secretly leaves her luxurious rooms to see something of Rome for herself. She meets American Joe Bradley, played by Gregory Peck, a newspaper reporter who was planning to interview the Princess the following day.

Of course the two fall in love as they tour Rome together, enjoying the romance and charm of the city, but knowing that their time together must be limited. They finally have to say their farewells, and Joe lingers for a while, along with a tearful audience, contemplating what might have been.

Frank Capra's Liberty production company had originally optioned the story in 1949. Capra had envisioned Cary Grant and Elizabeth Taylor in the lead roles. Capra eventually sold the rights to Paramount for $35,000 as his company had financial problems. He then withdrew from the project completely due to Paramount's tight budget and to the involvement of blacklisted writer Dalton Trumbo. William Wyler, however, had no compunctions whatsoever about working with Trumbo.

Capra also passed on making the movie because of the similarities between the story and the tumultuous private life of Britain's Princess Margaret. Before shooting began, Paramount made an agreement with the British Government that there would be no mention made of a possible connection between the film and the British Royal Family. A scene was shot for the sole purpose of establishing that the princess was not British.

All the main characters are excellently cast, Peck and Hepburn as the lovers actually became firm friends whilst working on the film. Eddie Albert is perfect as Peck's eager tag-along cameraman, providing perfect balance as comic relief.

Wyler, one of Hollywood's most reliable directors, shot the film on location in Rome, and the city's landmarks help enhance the already magical story. It was shot in black and white so that the characters wouldn't be upstaged by the romantic setting. The vibrant, evocative score by the great Georges Auric provides the finishing touch to a witty and warm and beautifully filmed movie. It is an absolute gem.