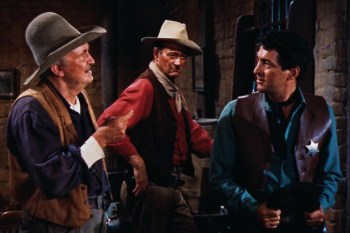 
'Rio Bravo' is a stylish and influential Western film, made in 1959 and directed by Howard Hawks. It stars John Wayne and Dean Martin with Angie Dickinson, Ricky Nelson and Walter Brennan. The film was successful with both the critics and the public and has become a Western classic.

The movie was made as a counterbalance to 'High Noon' in 1952 which famously portrayed one lawman's brave stand against lawlessness. By all accounts both Howard Hawks and John Wayne hated the message of 'High Noon'. Unlike Gary Cooper, the lawman in 'High Noon', who requests help from his town's citizens, John Wayne's character is constantly refusing help, on the grounds that the job should be done by professionals.

The plot is beautifully simple. A band of murderous desperadoes have laid siege to the small Texas town of Rio Bravo, intent on springing one of their gang from jail.

Sheriff John T. Chance (John Wayne) doesn't ask for help from the townspeople, but nor is he on his own. He gets help from a charismatic and disparate group of locals including Dude, a hopeless drunk with a past reputation (Dean Martin), Colorado Ryan, a skilled young gun-slinger (Ricky Nelson), a Mexican innkeeper (Pedro Gonzalez-Gonzalez) and Stumpy, a crippled old man (Walter Brennan) who holds the whole thing together with his goading of Wayne, his dialogue with the prisoner and his general role as comic relief.

The movie contains musical numbers - with Rat Pack crooner Dean Martin and teen idol Ricky Nelson in the film, this was almost inevitable - moments of comedy, a touch of seduction and romance, from the mysterious traveller 'Feathers' played by Angie Dickinson, and plenty of old-fashioned Western action, all held together by yet another fine performance by John Wayne playing basically himself, as the brave hero doing what a man has to do.

Hawks had established a deserved reputation as one of the most reliable directors in Hollywood, but after making 'Gentlemen Prefer Blondes' in 1953 he left America for Europe and made the epic flop 'Land of the Pharaohs'. 'Rio Bravo' marked his return to America and he put into it everything he knew best.

The siege-like setting for the story - a disparate group of unbalanced characters sealed in one location for a desparate last stand against evil-doers - has become a movie staple, borrowed time and again by directors such as George Romero and John Carpenter who recognised the dramatic advantages of such a limited setting, particularly in a low budget movie.

Hawks's own touch is to give the interaction of the characters more importance than the outcome of the siege itself. We can sense his enjoyment as he packs them all together in one pressurised situation and lets each reveal different facets of character as they make their successful stand against the forces of evil.

'Rio Bravo' is in many ways an old-fashioned Western where the line between good and evil is clearly delineated. Its a wonderful film, very watchable, and deservedly a classic with so many perfectly enjoyable elements working seamlessly together.