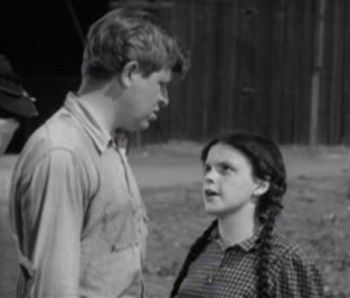 
'Pigskin Parade', also known as 'Harmony Parade', is a musical comedy movie made in 1936, directed by David Butler and starring Jack Haley, Stuart Irwin, Patsy Kelly and Arline Judge. It marks the feature movie debut of the young Judy Garland and includes Betty Grable in one of her early movie starlet appearances.

The story concerns a delightfully unlikely American football match between the mighty Yale and the tiny Texas State University. Jack Haley plays Slug, the new football coach of Texas and Patsy Kelly plays his wife, Bessie, who knows more about the sport than her husband. By pure luck, they discover a hillbilly farmhand, Amos, played by Stuart Erwin. Who has an extraordinary ability to throw melons, and he becomes the star player on the team. All goes well until the unexpected occurs.

The director, David Butler, was a pioneer of movie musicals who had directed Fox's biggest silent female star, Janet Gaynor, in hits like 'Sunnyside Up' in 1929. His work displayed an unusual sense of humor and he specialised in slow, graceful camera movements.

Betty Grable had most recently played a chorus girl in the Fred Astaire-Ginger Rogers musical 'Follow the Fleet' earlier in 1936, and she felt she was not being used to her best advantage. She soon moved to Paramount, but she finally rose to stardom after returning to Fox.

Stuart Erwin won a Best Supporting Actor Academy Award, the only actor so to do after heading the cast list.