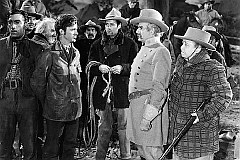 
'The Ox-Bow Incident' is a Western film made in 1943, directed by William Wellman and starring Henry Fonda, Dana Andrews, Mary Beth Hughes and Anthony Quinn. The movie is a key film in the history of the Western, one of many made in the 1940's which showed that the Western - previously a genre with low cultural prestige - could take on important issues.

The movie received an Academy Award nomination for Best Picture and in 1998, was selected for preservation in the United States National Film Registry by the Library of Congress as being "culturally, historically, or aesthetically significant."

Search Amazon for 'The Ox-Bow Incident'

The plot is an absorbing one and departs from the usual 'Cowboys and Indians' scenario. In a small Nevada town in 1885, a rumor spreads that a local rancher has been killed by rustlers. While the sheriff is out of town a lynch mob is formed and captures three suspicious-looking passing strangers. Despite their protestations of innocence, the men are hanged, only for the perpetrators to discover the rancher is not dead and the real rustlers have been apprehended.

This concise little film (only 75 minutes long) packs a good deal of star power. Henry Fonda is a local cowboy, shown initially as a thoughtless saloon brawler, who eventually stands up against the mob. The three victims are a patently innocent family man played brilliantly by Dana Andrews; Anthony Quinn as a Mexican drifter; and Francis Ford, brother of the illustrious director, John, as a senile old man. Frank Conroy is excellent as a blustering ex-Confederate major who bullies his weak son into helping with the hanging, and Jane Darwell, notable as Ma Joad in John Ford's 'The Grapes of Wrath' three years earlier, is a merciless old cattle woman.

'The Ox-Bow Incident' makes a powerful plea for the rule of law as the basis of civilization. Besides Fonda, the only townspeople who resist the mob hysteria ate a storekeeper (Hatty Davenport) and a black preacher (Leigh Whipper), who has more reason than most to protest, having seen his own brother lynched. A the end, when the truth has sunk in, Fonda shames the mob by reading out a letter written by Andrews's character to his wife.

Darryl Zanuck,, head of 20th Century fox at the time, insisted the film be cheaply shot on studio sets; in fact, the confined spaces give 'The Ox-Bow Incident' a greater intensity than it might have derived from expansive Western landscapes. The script is based on a highly accomplished first novel by Walter van Tilburg Clark, a Nevadan whose later novel, Track of the Cat, was also filmed by William Wellman.