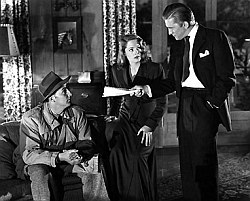 
'Out of the Past' is a magnificent film noir, regarded by many as the best ever made, directed in 1947 by Jacques Tourneur and starring Robert Mitchum, Jane Greer, and Kirk Douglas. It was based on the 1946 novel "Build My Gallows High" by Daniel Mainwaring (using the pseudonym Geoffrey Homes).

Although on release the movie was regarded as just an above-average B movie and received no Academy Award recognition, it is now viewed as a masterpiece of innovative film making, with a top-notch cast and a deceptively easy pace that belies the tension and danger lurking beneath the surface.

In 1991, 'Out of the Past' was added to the United States National Film Registry as being deemed "culturally, historically, or aesthetically significant."

Search Amazon for 'Out of the Past'

'Out of the Past' is an intriguing and absorbing movie and contains all the typical elements of film noir such as a deceitful femme fatale who is so beautiful she can be forgiven almost anything, the bitter and tangled past that returns to destroy the flawed main character, many scenes filmed at night time and skilful black and white cinematography by the the great RKO cameraman Nicholas Musuraca, with contrasting, atmospheric shadows.

Robert Mitchum, a byword for cool, dominates the movie as Jeff Bailey, the private eye whose past comes back to haunt him and who finds and falls for the ruthless Kathie Moffat, the epitome of selfish evil, played to the hilt by Jane Greer. A young Kirk Douglas shows an edgy magnetism as the racketeer Whit Sterling and we can see the star about to burst forth.

'Out of the Past' has a complicated, flashback-driven plot with twists and turns aplenty. The audience is constantly misled into thinking one way, but finds that in reality, something else has happened. Nothing is quite as it seems. A wonderful, engrossing movie which is now regarded, deservedly, as a classic.