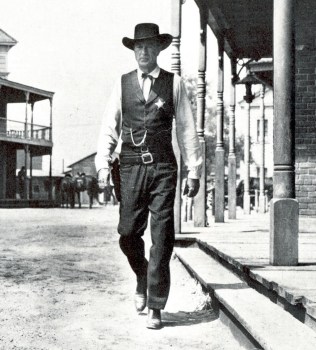 The 'High Noon' image of the lone Marshall standing alone, awaiting his fate at noon, is one of the most famous in movie history. It was used with great success in the Polish Solidarity movement in 1980.

The film it comes from is brilliantly and deceptively simple, a battle between good and evil, and Gary Cooper is at his best in his Oscar winning role as the embattled Marshall Kane. Regarded as one of the best Westerns ever made, 'High Noon' was a huge success on release and was nominated for seven Academy awards, winning four, including Best Actor for Cooper and Best Song for the hit, "Do Not Forsake Me, O My Darling" sung by Tex Ritter.

'High Noon' is rated at number 27 on the American Film Institute's best ever movies list. In 1989 it was selected by the Library of Congress for preservation in the National Film Registry.

On a blazing summer morning three members of a criminal gang converge on a small, quiet, arid western town called Hadleyville. They are planning to meet the gang leader, outlaw Frank Miller, played by Ian MacDonald, arriving on the noon train, in order to seek revenge on the town's Marshall, Will Kane, played by Gary Cooper, who was the man originally responsible for putting him in the penitentiary five years earlier.. Miller has been paroled and now wants his revenge. The Marshall is about to hand in his badge after marrying Amy, played by Grace Kelly when he hears the news. He starts to leave town with his new wife but changes his mind out on the prairie and comes back to face the gunmen.

He seeks help from the townsfolk he had previously helped but since they are gripped with fear, he will have to stand alone. ("I've got a wife and kids," says one of the townspeople when opting out.) People pull away from the marshal because they want to live another day.

His Deputy, Harvey Pell, played by Lloyd Bridges refuses to help and he is deserted even by his new wife. Meanwhile, High Noon remorselessly approaches, second by second, - the timescale of the story is almost exactly that of the movie. And so, completely alone, Kane takes the long walk into town, for his showdown with fate.

The movie is based on a short story by John Cunningham, called "The Tin Star" and originally published in Collier's Magazine in 1947. Kramer and Foreman purchased the film rights for $25,000.

From the start the film action was designed to take place in 'real time' - about 85 minutes. Throughout the film we see clocks, constantly reminding us about the passing of time, a countdown to the arrival of the train.

Zinnemann had served his movie apprenticeship in the Shorts Department of MGM and was skilled at planning a shoot to the smallest detail. The whole film was shot in 28 days during May and June, 1951, and only slightly over the budget of $750,000.

Location
The fictional town in which the action takes place is called Hadleyville, although we only see signs for it. The name is never actually mentioned by the actors. The bulk of the film was shot in the Western street at the Columbia Ranch in Burbank. (The same set, camouflaged as an Hawaiian street was used by Zinnemann the next year in 'From Here to Eternity'). The railroad shots were filmed at Sonora, in northern California, which had the long stretch of straight railroad which Zinnemann needed to point in the distance to the threat that was approaching the town.
Casting
It is difficult now, to imagine any other actor but Gary Cooper playing Marshall Will Kane, but several others, including Kirk Douglas, John Wayne and Gregory Peck were considered before Cooper was signed for the role. He was thirty years older than his movie bride, Grace Kelly and was ill during the shoot. He and Grace Kelly are not convincing newlyweds, even though they are rumoured to have had an affair during filming.

Gary Cooper was the ideal actor to play Kane. He was well known but his career was slipping and his recent pictures had not been successful. Suffering from arthritis, his stiff walk increased the sense of the Marshall's vulnerability. He never asked for makeup to look younger and his lined face reveals the torment and fear which any normal human being would feel.

Lee Van Cleef who plays Jack Colby, one of the Miller gang, makes his screen debut in the movie and has no word of dialogue.

Visual Look
Zinneman and his cinematographer, Floyd Crosby, cleverly used the smog of Los Angeles, which, on film, makes the sky unnaturally white, the perfect backdrop to the Marshall's black clothes. Kane is filmed often from low level, emphasising his height, uprightness and moral integrity.

The film was tightly controlled and every scene meticulously planned by Zinnemann. The result is a true movie landmark -- generally regarded as one of the best Westerns ever filmed, and a true work of art.

Cooper stands as the symbol of the independent American man who stands alone against a formidable enemy - a man of few words, but holding fast to a righteous moral code like a true American gentleman.

Foreman almost certainly based the movie's message on the hysteria of his times and how he and many others would stand alone during the McCarthy hearings (he faced blacklisting and had to go to England amidst a cloud of accusations), but the story is universal and applies to any case where a person must stand on principle. It is in the conflict between personal responsibility and the needs of the community where 'High Noon' excels. While it was okay for Kane to put his life on the line for the benefit of the community, the community refuses to return the favor.

Zinnemann created a movie which rose beyond the traditional confines of the Western genre. It is good entertainment, but it is complex and can be be read on different levels. It is this complexity which makes the film stand out from the crowd. It is what makes it truly great.