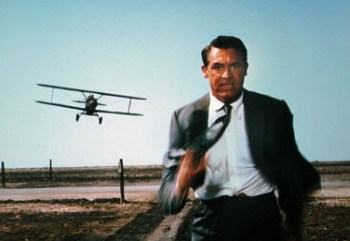 'North by Northwest' is an espionage suspense thriller made in 1959, directed by Alfred Hitchcock, and starring Cary Grant, Eva Marie Saint and James Mason, with Leo G. Carroll and Martin Landau.

From its premiere at Radio City Music Hall in New York City, the movie was a big hit. It went on to be the fourth-biggest-earning movie of 1959.

Search Amazon for 'North by Northwest'

The movie was nominated for three Academy Awards, Ernest Lehman for Best Story and Screenplay, George Tomasini for Best Film Editing and Best Color Art Direction/Set Decoration, but won none. It is however regarded as a classic of the genre. It is hugely entertaining and is one of Hitchcock's most sophisticated and stylish works. In 2007, the American Film Institute ranked this as the #55 Greatest Movie of All Time.

In 1995 the United States Library of Congress selected 'North by Northwest' for preservation in the National Film Registry.

As with many Hitchcock movies, it is a tale of mistaken identity, with an innocent man, Roger Thornhill (Cary Grant) being mistaken for a fugitive government agent, and, aided by a mysterious and beautiful blonde, Eve Kendall (Eva Marie Saint), is pursued across the country by a group of spies, meeting plenty of danger and adventure along the way and culminating on the face of Mt. Rushmore.

The action is fast-moving, confused and improbable - and is signposted by the film's title: there is no specific N by NW on a compass, just as in the film the hero makes a directionless journey looking for a character who doesn't exist. Everyone is playing a part and nobody is who they seem to be. But by the end of the film we don't care, we just sit back and enjoy.

Hitchcock invented the basic story line by recalling a real-life wartime case when some secretaries at a British embassy invented a nonexistent agent and successfully tricked the Germans into looking for him. Expanding on the idea, Hitchcock wanted to include the assassination of a foreign dignitary at the United Nations and a chase across Mt. Rushmore.

James Stewart was considered for the lead, Yul Brynner for the lead villain, and Cyd Charisse for the femme fatale.

Filming was prohibited at the United Nations, but Hitchcock got round the ban by shooting the master shot of Grant grading towards the building. The camera was hidden in a carpet cleaning truck across the street, and the real UN security guards are captured doing a double take as Grant walks across the courtyard.

Hitchcock's cameo appearances are a signature occurrence in most of his films. In North by Northwest, he is seen getting a bus door slammed in his face, just as his credit is appearing on the screen.

Production costs on North by Northwest were seriously escalated when a delay in filming put Cary Grant into the penalty phase of his contract, resulting in an additional $5,000 per day in fees for him before shooting even began.

At Hitchcock's insistence, the film was made in Paramount's VistaVision widescreen process; only two VistaVision films were made at MGM, the other being 'High Society'

For the famous airplane chase sequence, the swooping crop duster plane was shot from a ditch. Grant was subsequently photographed on a soundstage in a ditch in front of a process screen.

The Mount Rushmore set was constructed in concrete at MGM with a 30-by-150-foot backdrop of the stone heads of the four presidents.