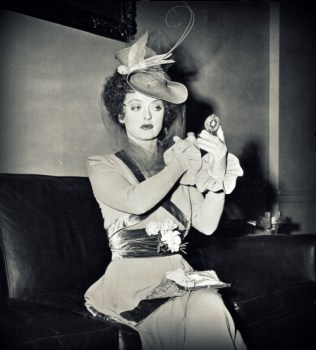 'Mr Skeffington' is a classic movie melodrama made in 1944, directed by Vincent Sherman and starring Bette Davis and Claude Rains. The movie is based on the popular 1940 novel of the same name by Elizabeth von Arnim. It was praised by the critics and received two Academy Award nominations: Best Actress for Bette Davis and Best Supporting Actor for Claude Rains.

Fanny Trellis, played by Bette Davis is a spoiled, self-absorbed young woman in pre First World War, small town America, interested only in hearing about how beautiful she is. In order to save her wayward brother from a foolish mistake, she marries the rich but boring Job Skeffington, played by Claude Rains. As the years go by the couple grow apart and they eventually divorce. Fanny even gives custody to Job of their daughter in order to pursue her own selfish life.

Her world changes dramatically when her beauty is ravaged by illness. She finally begins to realise how superficial her old life was and it is her ex husband, Job, returning from a Nazi concentration camp who helps her to see what true love is.

This is a very enjoyable movie. It was well written with many witty lines. The characterisation is good also and the main characters are very believable. The film delivers a message or even a moral, about the transiency of physical beauty, and the beautiful background music by Franz Waxman puts the seal on a first class film.

Bette Davis(1908-1989) One of the finest actresses ever to grace the screen, Bette Davis was nominated on 10 occasions for the Best Actress Oscar and won it twice in 1935 and 1938. She gives a marvellous, utterly believable performance as the spoilt Fanny Skeffington.
Claude Rains (1989-1967) A magnificent actor, Rains almost steals the show from Bette Davis. His serious demeanour is the ideal foil to her flamboyance. His long career spanned five decades and included classic films such as 'The Invisible Man' in 1933 and 'Casablanca' in 1942.
Walter Abel (1898-1987) was a brilliant character actor who had one of the longest Broadway careers on record, appearing there from 1919 to 1975. He began a prolific movie career in the mid 1930's and then smoothly made the transition to television.
Richard Waring (1910-1993) was a British-born American actor who had a successful career, appearing in both Hollywood movies and in many Broadway plays.