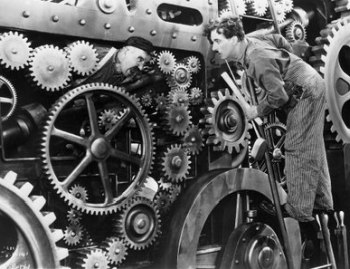 'Modern Times' is a satirical comedy film made in 1936 by Charlie Chaplin in which his iconic Little Tramp character, on screen in his last film, struggles to cope with the modern world. It was Chaplin's first film after his masterly 'City Lights' of 1931 and it was directed, written, scored, and produced by him. As well as Chaplin himself, it stars Paulette Goddard, (Chaplin's real-life wife), Henry Bergman, Stanley Sandford and Chester Conklin.

'Modern Times' is one of Chaplin's best-known and popular films and remains one of his greatest achievements. It is ranked at number 78 in the American Film Institute's 100 Years... 100 Movies list and in 1989 it was deemed "culturally significant" by the Library of Congress in 1989, and selected for preservation in the United States National Film Registry..

The plot revolves around the Tramp first as an assembly-line worker in a factory where he literally becomes trapped inside one of the machines and suffers a mental breakdown. He is then mistakenly put in jail, is released and takes a variety of jobs and has many escapades, all of which give rise to fine comedy. The movie ends on a hopeful note when he and his young lady friend, 'The Gamine' played by Paulette Goddard, walk down a road at dawn towards a better future. This was the last time cinema audiences would see the little Tramp character.

Initial shooting titles for the movie were "Production No. 5" and "The Masses", before the final title was decided upon.

Elaborate and expensive sets for the factory and department store scenes were built at Chaplin's studios and three whole street sets were built on the waterfront at San Pedro.

Shooting of the movie began in mid-October 1934 and lasted for ten months, a long time for a motion picture at the time, but it was considered fast work for a Chaplin film.

Chaplin made the film almost a decade after the first sound movie, 'The Jazz Singer' in 1927, and he initially conceived it as a conventional 'Talkie'. He actually wrote a dialogue script and enclosed the studio's open-air stage to experiment with some sound scenes but the footage was scrapped and the experiments confirmed his firm conviction that the universal appeal of the Tramp would be lost if the character ever spoke on screen. So 'Modern Times' is his last full-length silent movie although there is synchronised sound in the film. Chaplin's actual voice is heard singing an imaginary, nonsense song and sounds emanate from various machines and television screens.

In short the movie is a mini masterpiece. It is a protest film, very socially aware, and dealing with the themes of poverty, unemployment and the effects of assembly line machines on the workforce. Once again Chaplin's Little Tramp makes us laugh and cry and also think a little more about more serious matters. Once again Chaplin shows us his mastery of the art of filmmaking.