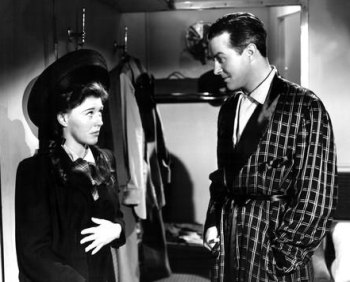 
'The Major and the Minor' is a romantic comedy film made in 1942, directed by Billy Wilder and starring Ginger Rogers and Ray Milland. Wilder had already scripted a number of successful movies but this was his first attempt at Hollywood direction. It was a great success, both critically and commercially and launched Wilder's exceptional directing career.

The movie is still great entertainment so long as we allow ourselves to be taken in and swept along by the basic premise - that a 31 year old woman can be mistaken for a 12 year old girl. It also contains one of the most unforgettable comic lines ever written - spoken by humorist Robert Benchley, to the grown up Ginger, "Why don't you get out of that wet coat and into a dry martini?". Just wonderful.

Ginger Rogers plays the "minor" of the title, Susan Applegate. She disguises herself as a young girl in order to buy a train ticket at half price. On the train she meets the "major" of the title, Major Philip Kirby, played by Ray Milland. He is attracted to the "12 year old" but cannot work out why.

The subterfuge leads to many comic moments and although the underage subject matter would be X-rated in today's moral climate, Wilder manages to get away with it triumphantly.

The movie's storyline is based on the theatrical comedy 'Connie Goes Home' by Edward Childs Carpenter which played on Broadway during September, 1923. The screen rights were owned by Paramount and Wilder considered it the ideal vehicle for his debut. He had been agitating for a directorial position for several years after forming a successful writing partnership with Charles Brackett. He felt capable of a more creative role in his movies and did not like the changes made to his scripts by some directors.

Ginger Rogers, fresh from winning the Best Actress Oscar for 'Kitty Foyle' in 1940, was his first choice for the starring role and he at first hoped to get Cary Grant for the Major. With Grant unavailable, Ray Milland proved an ideal substitute.

Both Rogers and Milland liked working with Billy Wilder and it was a happy shoot. Wilder further endeared himself when he offered the role of Susan's mother to Ginger's real-life mother, Lela Rogers, her first such appearance.