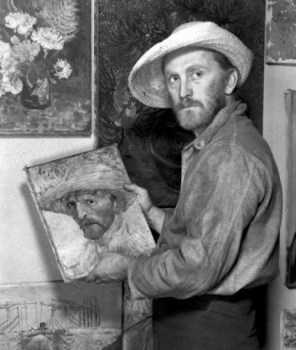 
'Lust for Life' is a dramatic biographical film about about the life of the Dutch artist, Vincent van Gogh, made in 1956 and starring Kirk Douglas, James Donald, Pamela Brown, Everett Sloane and Anthony Quinn. The movie was directed by Vincente Minnelli and was based on the 1934 novel by Irving Stone, which was itself based on the many letters written between Van Gogh and his brother, Theo.

The film performed poorly at the box office but was critically praised, receiving four Academy Award nominations including Best Actor for Kirk Douglas. (He lost to Yul Brynner for 'The King and I'.) It won in one Oscar category, Best Supporting Actor for Anthony Quinn.

Search Amazon for 'Lust for Life'

Whilst based on the Irving Stone novel the movie does deal with the most important parts of Van Gogh's life and in a surprisingly accurate way. It does not shy away from the ugliness of parts of his life: the loneliness, the anguish, the mental instability, the lack of appreciation from everyone except his brother.

The film shows van Gogh's unhappy life from his younger days when he attempts, unsuccessfully to do missionary work amongst coal miners in Belgium. Interpreting too literally the Christian gospel, he gives away all his worldly possessions and, unsurprisingly, finds himself poverty stricken, living in squalor. He is found by his brother, Theo, the one constant positive force in his life, played by James Donald, who persuades him to return to Holland, where he finds his true vocation, and his great natural creative gift.

After being rejected by Kay, the woman he loves, played by Jeanette Sterke, he forms a relationship with a prostitute, Christine, played by Pamela Brown, which ultimately fails, like all his relationships with women.

He eventually goes to live with his brother in Paris, where he meets other major Impressionist artists. One of these, Paul Gauguin, played, to the hilt, by Anthony Quinn, is persuaded by Theo to join Vincent in the southern village of Arles. The emotional clashes of temperament between the two men increase Van Gogh's mental instability and cause him to mutilate his ear.

The remainder of the film shows his attempts to deal with his mental health problems, first in an asylum headed by Dr. Peyron, played by the English actor, Lionel Jefferies, and then with a sympathetic homeopathic doctor, Dr. Gachet played by Everett Sloane. Despite the attempts to help him, his despair overcomes him and he commits suicide by shooting himself.

As one would expect in a 1956 movie, the grisly aspects of his life - the ear mutilation and the suicide - occur offscreen.

The film belongs to Kirk Douglas as Van Gogh. In a part completely different from his normal tough guy roles, he performs brilliantly, capturing with his tortured face and body, the passion, drive and despair of the tormented genius. With his hair dyed red and with the beard he also looks like Van Gogh.

James Donal as Vincent's brother Theo is an ideal calming contrast to the tormented artist. Anthony Quinn's role as the arrogant and headstrong Paul Gauguin is short but his performance was good enough to win the Academy Award for Best Supporting Actor (his second such Oscar after 'Viva Zapata' in 1952.) The rest of the cast are supporting players but each is superb, from Henry Daniell as the elder Van Gogh to Pamela Brown as Christine and the dependable Everett Sloane as the art-loving doctor.

The use of color is exquisite throughout the film, helping to recreate Van Gogh's view of the world. His vision of flaming wheat fields and the moving darkness of the night sky is conveyed beautifully and the audience begins to experience the world through the artist's eyes.

Vincente Minnelli is better known for his musical works but in 'Lust for Life' he manages to convey both Van Gogh's torment and his rare artistic genius. After 'An American in Paris' it is probably Minnelli's best work, still one of the finest film biographies and a real Hollywood masterpiece.