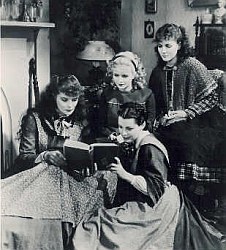 'Little Women' is a dramatic movie made in 1933, directed by George Cukor and starring Katharine Hepburn in one of her early defining roles as 'Jo' March. It is adapted from Louisa May Alcott's famous and often-adapted novel and traces the lives of the New England March family - four sisters: Meg, Jo, Beth and Amy, their mother and neighbour Mr. Laurence, and his grandson Laurie. This is the third screen adaptation of the book, following silent versions released in 1917 and 1918 and it was to be again filmed in 1949 when it starred June Allyson and Elizabeth Taylor.

The movie was a smash hit when it was released in November 1933, breaking the Radio City opening week theater records and it was voted one of the 10 Best Pictures of 1934 by 'Film Daily'. It received three Academy Award nominations, losing for Best Picture and Best Director but winning the Oscar for Best Adapted Screenplay for husband-and-wife screenwriters Sarah Y. Mason and Victor Heerman.

The production of 'Little Women' was lavish and employed more than 4000 people and involved building detailed recreations of New England locations from the book. David O. Selznick, the original producer, who left to join MGM, allocated a large budget of $1,000,000 and lined up an all star cast. As well as the brilliant Katharine Hepburn, who had just finished 'Morning Glory' for which she would win her first Best Actress Oscar, he cast Jean Parker, Frances Dee, and Joan Bennett as Beth, Meg, and Amy, all strong, star quality performers.

The movie marked one of the first occasions when a classic of literature was produced without a major Hollywood rewrite to make it more commercial. The story line follows the book in that there is no defined plot, only a series of events in the lives of the four sisters and their mother as they struggle to maintain a normal life while their father is off with the Union army in the Civil War. Romantic entanglements, marriages, and family bereavement add to the thoughtful and entertaining drama.