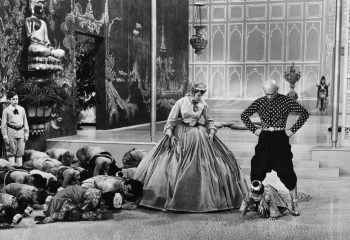 
'The King and I' is a musical film made in 1956, directed by Walter Lang and starring Yul Brynner, Deborah Kerr and Rita Moreno. The screenplay is by Ernest Lehman and is based on the Richard Rodgers and Oscar Hammerstein's 1951 smash Broadway musical hit of the same name, which, in turn, is based on the book "Anna and the King of Siam" by Margaret Landon.

The film was extremely successful on release, both with the critics and the public. It cost $6.5 million to make and it grossed $21.3 million in the U.S. alone. It has gone on to become one of the most successful musicals ever made, making in excess of $6.5 billion.

It received nine Academy Award nominations and won five, including Best Actor for Yul Brynner. From a musical point of view at least, it is regarded as the best of the Rodgers and Hammerstein musicals and it is still extremely popular to this day. Four of the songs stand out as having become evergreen standards: "Getting to Know You", "Whistle a Happy Tune", "Hello, Young Lovers" and "Shall We Dance". On the American film Institute's List of "100 Years of Musicals" 'The King and I' is ranked at number eleven.

Because of inaccuracies in the representation of King Mongkut, on release the film was instantly banned in Thailand and still is to this day.

Deborah Kerr plays Anna Leonowens, the genteel British governess who, with a son of her own, journeys from England to 19th century Siam (now Thailand) to instruct the sixty-seven children of the despotic king, played by Yul Brynner.

Their meeting leads to a culture clash as well as a battle of the sexes. The fiery, but compassionate Mrs. Anna at first dislikes the king but is then charmed by him. She gradually changes him from a near tyrant to a man who can see other people's point of view and who can continue to change and develop.

In 1944 Margaret Landon wrote the best-selling novel, ' Anna and the King of Siam' about the life of Anna Leonowens, who, in the early 1860s, was the actual school teacher to the children of King Mongkut of Siam and who wrote an account of her life there.

The book sold over a million copies and was translated into more than twenty languages. In 1946 it was made into a non-musical film starring Irene Dunne and Rex Harrison.

Broadway superstar, Gertrude Lawrence loved the film and thought it would make an excellent stage musical for herself. She brought it to the attention of her friends, Richard Rodgers and Oscar Hammerstein II who in 1950,bought the play rights from Landon and created the musical 'The King and I' from her book. The musical became an instant hit and a Broadway phenomenon, changing conventional ideas of what made a successful musical adaptation. It opened in 1951 and closed three years later after 1,246 performances.

20th Century-Fox already owned the screen rights to the Margaret Landon book on which the musical had been based and they were very keen on producing their second movie based on it. Art directors Lyle Wheeler and John DeCuir spent $750,000 designing forty sets, each significantly more opulent than the stage play's award-winning sets. Jerome Robbins was brought to Hollywood for the first time to adapt his stage choreography for the screen and Irene Sharaff, whose stage costumes had won a Tony Award was also hired for the film version.

The studio had to rent extra generators from M-G-M and Columbia to produce enough light to illuminate the palace courtyard set. Deborah Kerr's costumes weighed between 32 and 42 pounds and the dress she wore during the "Shall We Dance" number, which featured a metal hoop with a 25-foot circumference, gave her bruised legs and caused her to lose 15 pounds during filming (she referred to herself as "The Melting Miss Kerr").

Casting
"The King and I" was a personal triumph for Yul Brynner and Gertrude Lawrence when the musical made its debut on Broadway. The king of the story seemed to be tailor-made for Mr. Brynner, who made it his signature role and returned with it to the musical theater, again and again.

Although the role was originally to have been given to Marlon Brando, eventually good sense prevailed and Yul Brynner re-created the role with which he had had so much success on Broadway and which is now so closely identified with him. When the film role was offered, Brynner refused it at first, even suggesting that he would rather be director rather than actor. When 20th Century-Fox persisted, he demanded and got script and cast approval as well as the $300,000 fee and percentage of the profits they were already offering.

Brynner had a pleasing, resonant, baritone voice and was the only major cast member whose songs were not dubbed. He starred in a sitcom version in the 1970's, and he appeared in the musical on stage for many years, eventually totalling over 4,000 performances in the role of King. He is one of the few people who have won both a Tony Award and an Academy Award for the same role.

Tragically, Gertrude Lawrence died of cancer during the run of the stage show and several actresses were considered for the film role of Anna, including Maureen O'Hara and singer Dinah Shore. Yul Brynner suggested Deborah Kerr for the role after he met her during the Broadway run of 'Tea and Sympathy'. She had a strong reputation with the public and the correct Britishness for the part, although her voice would have to be dubbed. Her singing voice was supplied by Marni Nixon, who would also later dub for Natalie Wood in 'West Side Story' in 1961. Kerr's is more of a charismatic acting role, with singing secondary. She and Brynner work well together and provide the emotional spark for the movie.

Marni Nixon had to sing in a lower range than normal in order to match Kerr's voice. To help, the Fox sound department used a special filter to enhance her lower tones. She also carefully studied Kerr's movement and facial expressions to foster the illusion that the character was really singing. The result was exceptional,one of the best dubbing jobs in film history.

Dorothy Dandridge was initially cast as "Tuptim before Rita Moreno was given the role.

This is a thoroughly entertaining, good-hearted story, enriched by some of Rodgers and Hammerstein's most enduring music, and expounded with wit, humor and great skill.