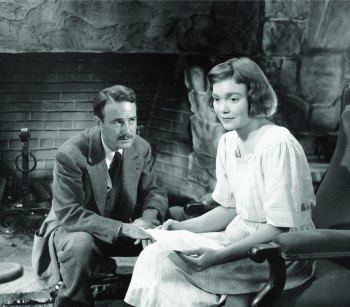 'Johnny Belinda' is a dramatic movie made in 1948, directed by Jean Negulesco and starring Jane Wyman and Lew Ayres, with Charles Bickford, Agnes Moorehead and Stephen McNally. It is a most unusual creation, fast-paced, engrossing and still well worth watching today.

'Johnny Belinda' was the first movie to involve the subject of rape, previously prohibited by the Motion Picture Production Code. The movie was a great critical success and was nominated for 12 Academy Awards, including Best Actor for Lew Ayres, Best Picture and Best Director. Jane Wyman won the Best Actress Oscar, the first performer in the sound era to win an Oscar without saying a word. She also made the shortest Best Actress Oscar acceptance speech when she said: "I won this award by keeping my mouth shut and I think I'll do it again." Also nominated was the cinematographer Ted McCord for his breathtaking coastal images.

The movie was remade for television twice in the 1960's and again in 1982. None of the remakes bear comparison to the magnificent original.

The story takes place in the area of Cape Breton Island in far eastern Canada, at the end of the nineteenth century. Jane Wyman plays Belinda McDonald, a deaf and dumb girl who, because of her disability, is considered stupid by the community and even by her father, Black McDonald and aunt, Aggie McDonald, played by Agnes Moorehead.

Everything changes when a new doctor, Dr. Richardson, arrives in town and, realising Belinda's intelligence, teaches her sign language and lip reading. His efforts are challenged when Belinda is raped and made pregnant by a thuggish local fisherman, Locky McCormick, played by Stephen McNally. When McCormick tries to take the baby away, the traumatised girl shoots him. She stands trial for murder, leading to the film's climax.

The movie is based on the play of the same name by Elmer Harris, which was a big hit on Broadway in 1940. Harris based his storyline on an actual event in the life of Lydia Dingwell, of Dingwells Mills, Prince Edward Island.

Although initially concerned about the commercial appeal of a movie whose leading lady does not speak, Warner Bros. paid over $50,000 for the film rights to Elmer Harris' play, due mainly to the support which top Warners producer, Jerry Wald gave to the project.