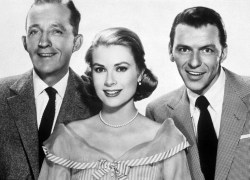 'High Society' received two Academy Award nominations, for Best Song, "True Love", and Best Music Score, and although it was compared unfavorably with its 1940 predecessor, it became one of the highest grossing films of 1956.

The movie is unusual for a musical in that there are no real dancing scenes, but there are some marvellous songs by Cole Porter, including "True Love", sung by Crosby and Grace Kelly, ""Well, Did you Evah" sung inimitably by Crosby and Sinatra, "Who Wants To Be A Millionaire?" by Sinatra and Celeste Holm, and a wonderful duet between Crosby and Louis Armstrong, "Now You Has Jazz". Unlike her co-stars, Grace Kelly was not a singer and "True Love" was written to accommodate her narrow vocal range. The song lost its Oscar to Doris Day's "Que Sera Sera" which became a massive chart hit in 1956.

The plot is essentially the same as in the earlier film although the action now takes place in Newport, Rhode Island, rather than Philadelphia, which gives an excellent excuse for Louis Armstrong to appear at the Newport Jazz Festival. The action revolves around a society wedding between the beautiful Tracy Lord (Grace Kelly) and the rich but dull George Kitteridge (John Lund). Tension builds with the arrival of Tracy's ex-husband, Dexter Haven (Bing Crosby) who still loves her and wants to win her back. Complications ensue when two journalists from 'Spy' Magazine, Mike Connor (Frank Sinatra) and Liz Imbrie (Celeste Holm) arrive to cover the story.

As with its 1940 predecessor the movie has an all star cast, but angled to the musical rather than pure acting. Either Bing Crosby or Frank Sinatra on their own would virtually guarantee a film's success. Putting them together was a rare event and it made the film a surefire hit. Their duet, "Well, Did You Evah" is one of the highlights of the movie. They are both full of charm and charisma to their fingertips and they contrast and complement each other well. Crosby is as effortless as ever in his delivery, and Sinatra in particular is in fine acting and singing form.

Grace Kelly, too, performs her role well in her last film before becoming Princess of Monaco. She is stunningly beautiful, and is brilliant when she drunkenly sings 'You're Sensational'. Celeste Holm performs the difficult role of "the other star" extremely capably, at least as well as Ruth Hussey in the original.

Of course its very easy to constantly compare 'High Society' unfavorably with its brilliant 1940 original. The cast of 'The Philadelphia Story' was incomparably good and at the top of their game. The whole point of 'High Society' is that it is a musical, not a dramatic comedy. And as a musical it excels. A wonderful cast, fantastic music and a good script. It does not get much better than this.