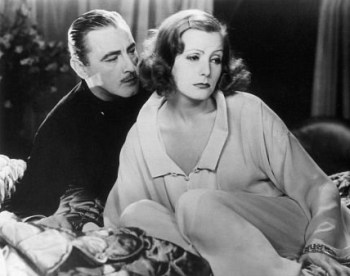 
'Grand Hotel' is a dramatic movie directed in 1932 by Edmund Goulding and starring many of the top Hollywood names of the early 1930's including Greta Garbo, John Barrymore, Joan Crawford, Wallace Beery, and Lionel Barrymore. The screenplay by William A. Drake was adapted from his own 1930 Broadway play which was in turn based on a 1929 novel 'Menschen im Hotel' by Vicki Baum. Baum was an Austrian-born American writer who had spent six weeks as a maid in a German hotel.

The movie won the Academy Award for Best Picture, from its only nomination, the only film ever to have done this. 'Grand Hotel' was selected, in 2007, for preservation in the United States National Film Registry by the Library of Congress and Garbo's famous line "I want to be alone," is ranked at number 30 in the American Film Institute's list of 100 Years... 100 Movie Quotes.

The movie was an outstanding box office success. It was the top money-making movie of the year, so much so that MGM became the only movie studio that year to report a profit. The movie opened with one of the first red carpet premieres at Grauman's Chinese Theater in Hollywood and by the London opening there was exceptional demand for tickets. The movie made a profit of $950.000 on approximately $6 million in worldwide box office.

The plot of the movie involves several interwoven story lines following the activities of five guests of a busy and luxurious Berlin hotel. Dr. Otternschlag, played by Lewis Stone, a long term resident of the hotel observes that "People come and go. Nothing ever happens," then, to prove him wrong, a great deal happens.

An ageing and lonely Russian ballerina, Grusinskaya (Greta Garbo), a dashing Baron Felix von Gaigern (John Barrymore), who is, in reality a petty thief, Flaemmchen, a beautiful and ambitious stenographer (Joan Crawford, who turned her small role into a film-stealer), a dying bookkeeper, Otto Kringelein (Lionel Barrymore), and a ruthless and villainous German businessman Preysing (Wallace Beery) find their lives changed, and in one case, ended, by their visit to the hotel.

Irving Thalberg, Head of Production at MGM, invested $15,000 in William A Drake's Broadway play "The Grand Hotel". The play opened in November 1930 and ran for over a year, returning a profit to MGM before the film was made.

Thalberg wanted the movie to be an all star feature and signed up five of the studio's biggest stars. The conventional studio tactic was to use just one or two big names in order to keep production costs low and profits high. 'Grand Hotel' was the first time a studio had used a movie as a showcase for a large number of its top stars. MGM repeated the formula the following year in 'Dinner at Eight' and it has more recently become commonplace in movies such as 'Airport' (1970), and The Towering Inferno (1974), among others.

Thalberg and the director, Edmund Goulding experienced problems with blending the five large and sensitive egos of the main stars. Garbo was promised that she would be billed by her last name only, to emphasise her status. It is interesting that she and Joan Crawford share no scenes together to avoid either one upstaging the other. Wallace Beery felt that his role was too seedy, but relented when Thalberg allowed him to use a German accent to differentiate him from his earlier movie characters. Once filming began there was much manoeuvring between the stars to outdo each other. The winner, hands down, was Joan Crawford, a temperamental actress who turned her small role into a movie-stealer.

The luxurious, art-deco sets, shimmering with black and white floors and gleaming bannisters, were designed by Cedric Gibbons and included elaborate staircases and a lavish lobby, portraying a three hundred and sixty degree desk, allowing action to be shot from virtually any angle. To prevent noise, the hundreds of actors in the busy lobby scenes were required to wear socks over their shoes. With costumes by Adrian, a famous costumer of the day, the design standards opened the door for the dazzling and elaborate art productions for which the 1930's would be famous, and which set the benchmark for all movies to follow.

The whole cast is superb, both the main stars and the supporting cast although strangely, none of the star players or its director was Oscar-nominated.
Greta Garbo(1905-1990) A towering presence in early sound cinema and still a movie legend, despite making less than 30 films in Hollywood. In 'Grand Hotel' she plays the aging ballerina in an over-the-top way but her amazing screen presence lights up the movie whenever she appears.
Joan Crawford(1904-1977) Joan Crawford gives a dynamic, movie-stealing performance as the cynical but appealing stenographer, Flaemmchen. Crawford went on to become one of the top actresses in Hollywood and won a Actress Oscar for 'Mildred Pierce' in 1945.
Wallace Beery(1885-1949) After beginning his career as a heavy in silent movies, Beery became a top star in early 1930's talkies playing intimidating but lovable slobs. His performance as the menacing and all too human businessman Preysing is the lynchpin of the movie's plot.
John Barrymore(1882-1942) John Barrymore was the most acclaimed of the famous acting family. After a highly successful Broadway career, Barrymore became "The Great Profile", a wonderful cinematic romantic lead, before he lost his looks through alcohol.
Lionel Barrymore(1878-1954) The brother of John, Lionel brilliantly plays one of the most difficult roles in the film, that of a meek little man who finds courage, and who finally gets the girl. He is best remembered for the his portrayal of the Mr Potter in the 1946 classic 'Its a Wonderful Life'.
Lewis Stone(1879-1953) Stone plays the urbane Doctor Otternschlag who utters the famous lines at the start and end of the film: "Grand Hotel. People come. People go. Nothing ever happens". He appeared in over 200 films in a long career and later became world famous for portraying Mickey Rooney's father, Judge Hardy, in the Andy Hardy series.