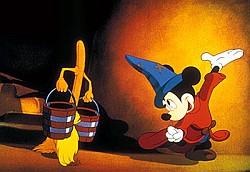 
'Fantasia' is an innovative animated movie produced by Walt Disney in 1940 and consisting of eight animated sequences set to pieces of classical music conducted by Leopold Stokowski. It was only the third full-length motion picture created by Disney and was of great significance to him.

Although now commonplace, creating images to interpret music was revolutionary when this audacious milestone in animation, visual creativity and stereophonic audio recording was conceived and executed by the Walt Disney studio. Graced by the eminent symphonic star Leopold Stokowski conducting the Philadelphia Orchestra, 'Fantasia's eight wide-ranging sequences comprise a concert with ambitious, amusing, portentous, and experimental cartoons accompanying pieces by Tchaikovskky, Mussgorgsky, Schubert, and others. Each segment begins with a live-action introduction by the narrator and host of the film, Deems Taylor.

The film's 508 characters were created by sixty animators working under eleven directors (under the supervision of Ben Sharpsteen) and in all over 1,000 artists and technicians were used and 600,000 celluloid drawings made.

On release 'Fantasia' was heralded as something unique and stunning by film critics. Classical music critics were more reserved and the public was also slow to appreciate the film. It was certainly not an immediate commercial success as it was released during the Second World War when most of the profitable European markets were cut off. But since then the movie has been recognised as the classic that it is and has been reissued multiple times with its original footage and audio being deleted, restored or modified in each version. It has gained in popularity on each release and is now ranked at number twenty-one in the list of highest-grossing films of all-time when adjusted for inflation.

'Fantasia'was ranked in fifth place at the 1940 National Board of Review Awards in the Top Ten Films category and Disney and Stokowski won a Special Award for the film at the 1940 New York Film Critics Circle Awards. Fantasia also won two Special Academy Honorary Awards in 1942 - one for Disney, William Garity, John N. A. Hawkins and the RCA Manufacturing Company for their "outstanding contribution to the advancement of the use of sound in motion pictures through the production of Fantasia", and the other for Leopold Stokowski "and his associates for their unique achievement in the creation of a new form of visualized music in Walt Disney's production Fantasia, thereby widening the scope of the motion picture as entertainment and as an art form".

In 1990, Fantasia was selected for preservation in the United States National Film Registry by the Library of Congress as being "culturally, historically, or aesthetically significant". the film is ranked at number 96 in the American Film Institute's Top 300 films and at number 5 in their Top 10 Animation films.

Disney's original concept was for 'Fantasia' to be a continuous project, with an updated version being released every few years. During 1941, story material was collected and developed based on different musical pieces, including "Ride of the Valkyries" by Richard Wagner, "Invitation to the Dance" by Carl Maria von Weber, and "Flight of the Bumblebee" by Rimsky-Korsakov. The initially disappointing box office results together with the entrance of the US into World War II brought an end to these plans.

Some of the sequences have become legendary. Of particular note is the appearance of Mickey Mouse, never more delightful or hilarious than as the Sorcerer's Apprentice desperately trying to control the self-duplicating brooms he has conjured up to do his chores. Also extremely popular are the dancing Chinese mushrooms, a darling chorus line of eyelash-batting pachyderms, the hippos in ballet tutus cavorting daintily and fleeing caped alligators to "The Dance of the Hours".

'Fantasia' was years ahead of its time and is still magnificent, high quality, magical entertainmentent. It is considered by many to be one of the greatest films ever made.

The eight musical sequences are as follows. With the exception of the Sorcerer's Apprentice all are performed by The Philadelphia Symphony Orchestra (as The Philadelphia Orchestra), conducted by Leopold Stokowski.

The Nutcracker Op. 71a (1892) by Pyotr Ilyich Tchaikovsky

The Sorcerer's Apprentice (1897) by Paul Dukas Performed by an orchestra of Los Angeles musicians, conducted by Leopold Stokowski

The Rite of Spring (1913) by Igor Stravinsky (abridged)

No Nominations:
Two Special Awards:
To Walt Disney, William Garity, John N. A. Hawkins and the RCA Manufacturing Company for their "outstanding contribution to the advancement of the use of sound in motion pictures.
To Leopold Stokowski (and his associates) for their unique achievement in the creation of a new form of visualized music.