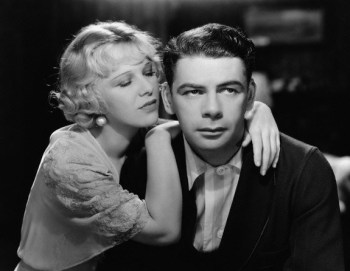 
'I Am a Fugitive from a Chain Gang' is a powerful dramatic adventure film which takes a bravely critical look at the harsh penal practices common in the prison system of the southern states of America, particularly Georgia, just after WW1. It was made in 1932, directed by Mervyn Leroy and stars Paul Muni and Glenda Farrell, two of Warner Brothers' leading actors of the 1930's.

The movie received three Academy Award nominations without winning any: Best Picture, Best Actor for Paul Muni and Best Sound, Recording for Sound Director, Nathan Levinson. In 1991, it was selected for preservation in the United States National Film Registry by the Library of Congress. The movie's screenplay is based on an autobiographical collection of writings by Robert E. Burns, who himself escaped from a chain gang and became a successful magazine editor.

Search Amazon for 'I Am a Fugitive from a Chain Gang'

'I Am a Fugitive from a Chain Gang' vividly depicts an innocent man, James Allen, played by Paul Muni, who is framed for the $5 robbery at a hamburger stand and is sentenced to ten years' hard labor in the Deep South of America. In order to seel justice and to clear his name he escapes from the brutality of the prison and begins a new life, changing his name to Allen James. He prospers in his new life and becomes a man of influence and importance. The State, though, has a long memory and when he is betrayed, he is imprisoned again. He escapes again, and is condemned to life as a broken, criminalised fugitive.

In 1932 when the movie was made, Mervyn Roy was able to tell the story of cruelty and brutality in an honest and realistic way as the censors were yet to begin enforcing the Production Code. The movie has a strong and unmissable social commentary and Warner Brothers took a risk in bringing it out during the Great Depression when the country seemed more inclined to light entertainment.

The film's story is a surprisingly faithful account of the real life tragedy of Robert E. Burns. Burns had been sentenced to hard labor on a Georgia chain gang after a minor grocery store robbery in 1922. He escaped, was re-arrested and escaped again, in 1930. He evaded capture and became a tax official in New Jersey. He serialised his story in 'True Detective Mag' in early 1931, whilst still living in hiding. He then published it as a novel in March of the following year.

Daryll Zanuck, then Warner's head of production purchased an option on the movie rights for $12,500 from Burns's brother. He also hired Robert Burns, still a genuine fugitive, as consultant, although paying him only travelling expenses. Burns visited Hollywood under an assumed name, then returned to New Jersey where, almost a month after the film was released, he was arrested. This time the governor of New Jersey refused to extradite him, citing the cruel circumstances of his incarceration.

The movie is arguably the finest of the series of hard-hitting social-protest dramas in which Warner Brothers specialized during the 1930's and the reputation of socially conscious director Mervyn LeRoy, who also directed 'Little Caesar' and the lynching movie 'They Won't Forget', is identified perhaps more with this film than with any other. He certainly does not hold back in his very personal expression of social outrage. The film is devoid of the melodrama seen in many films of this era, and instead tells its story in very realistic terms. Rock splitting, sadistic guards, escapes, (including the seminal pursuit by baying bloodhounds through a swamp), solitary confinement - the vocabulary of the Hollywood prison genre was laid down here.

The movie is worth seeing just to appreciate how often it has been referenced or copied by other films such as 'Blackmail' in 1939 with Edward G. Robinson, 'The Defiant Ones' in 1958 with Tony Curtis and Sidney Poitier, and most recently in the Coens' 'O Brother, Where Art Thou?'

The movie is inevitably dated to modern eyes but still powerfully disturbing down to the famously haunting and heartbreaking last line. As Muni's fugitive Jim slips away into the night, his lover plaintively calls out "How do you live?" From the darkness comes the whisper, "I steal." Tragically, he has come to realise that he has to be a criminal in order to survive.

'I Am a Fugitive from a Chain Gang' did have an impact on the real world of prison reform. Lawmakers had to re-think the bleak treatment meted out to chain gang inmates as well as considering if such punishment was justified. Warner Bros. were sued, unsuccessfully, by the warden portrayed in the film, J. Harold Hardy, for "vicious, untrue and false attacks".

Eventually, the brutal chain gang system was successfully reformed and had been outlawed by 1937. In 1945 Robert Burns made the brave decision to return to Georgia where the Georgia Pardon and Parole Board commuted his sentence to time already served and restored his civil rights. They could not officially give a full pardon as he had previously pleaded guilty to the robbery.

Paul Muni (1895-1967)
An Austrian born actor who grew up in Chicago and who became one of Hollywood's premier performers during the 1930's. He gives a powerfully moving performance as James Allen, (in a neat reversal from his thuggish role as Scarface the same year), capturing all of the confusion and pain of his inexplicable situation. The audience is able to feel the dark horror into which he is forced to descend, and shares with him the sense of hopelessness growing with each passing day. Muni played many biographical title roles during his long award-winning career, such as Louis Pasteur in 'The Story of Louis Pasteur' in 1936 and Emile Zola in 'The Life of Emile Zola' the following year.
Glenda Farrell (1904-1971)
She was one of Warner Brothers' most prolific actresses of the 1930's, after starting her career in the theater. After leading roles in 'Little Caesar' in 1931 and 'I Am a Fugitive from a Chain Gang', she played in several more films and finally starred in her own series, as Torchy Blane, playing the "Girl Reporter" in seven films, from 1937 to 1939.