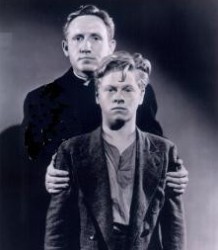 
'Boys Town' is a dramatic film based on real life events, made in 1938, directed by Norman Taurog and starring Spencer Tracy, Mickey Rooney and Henry Hull. On release the film quickly became a smash hit nationwide and it was voted one of the 10 best pictures of 1938 by Film Daily. It was well received by the critics and was nominated in five categories for Academy Awards, winning two, Best Actor for Spencer Tracy (his second Best Actor Award in succession) and Best Original Story.

The movie was based on the real-life experiences of an Irish-born Nebraska priest, Father Edward J.Flanagan, whose life's ministry was championing the cause of abandoned and delinquent boys. Flanagan was still very much alive and working as the film was made and Tracy spent a week with him before production to watch how he interacted with the boys.

The movie tells the story of Father Flanagan's struggle to get Boys Town set up, with the parallel storyline of the rehabilitation of Whitey, played by Mickey Rooney, the younger brother of a convicted criminal. At first a cocky rebel, Whitey gains respect and rises to a position of responsibility within Boys Town's sel-contained world.

Spencer Tracy as Flanagan gives a masterclass in film acting. He never indulges in overacting and is the solid, reassuring center of the film. When he speaks his words carry weight and his presence commands attention. Mickey Rooney, on the other hand, could very easily overplay his hand and his portrayal of the tough delinquent, Whitey Marsh, occasionally comes close to ham acting but overall is very believable. All the other roles are well played, particularly Bobs Watson as the endearing Pee Wee.

MGM made a successful sequel in 1941, 'Men of Boys Town' with Spencer Tracy and Mickey Rooney reprising their roles from the earlier film.

The 'Boys Town' movie gave the real-life orphanage a major boost, and it eventually became a successful multi-million dollar organization, helping boys (and girls) throughout America.