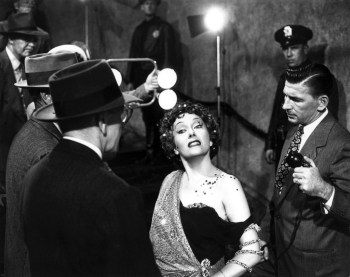 
'Sunset Boulevard' is a classic American film-noir made in 1950, directed and co-written by Billy Wilder and starring Gloria Swanson and William Holden.

The movie was critically acclaimed on release and is generally and consistently accepted as one of the masterpieces of American cinema. It was nominated for eleven Academy Awards and won three, for Best Art Direction, Best Music and Best Writing. In the American Film Institute's list of the 100 best American films of the 20th century 'Sunset Boulevard' is consistently highly placed, currently number 16, and in 1989 it was included in the first group of films selected for preservation in the National Film Registry by the U.S. Library of Congress.

The movie is set in the Hollywood of the 1950's where an unemployed screenwriter, Joe Gillis (William Holden) is in financial difficulties. After eluding his creditors in his car he has a flat tire and pulls into the driveway of a ramshackle mansion belonging to former silent-movie star Norma Desmond (Gloria Swanson) on a stretch of Sunset Boulevard. She hires him to rewrite her screenplay 'Salome' but her jealousy and insanity ultimately cost him his life.

The film reaches a superbly ghoulish climax when the police crawl over the murder scene, reminding the demented Norma of her glory days and she vamps up to the camera declaring that she is "Ready for my close up, Mr. De Mille."