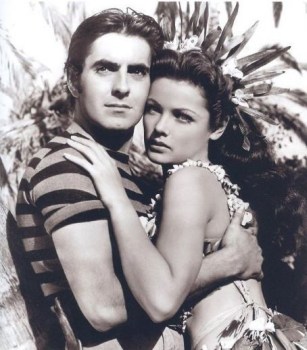 
'Son of Fury: The Story of Benjamin Blake' is an adventure film made in 1942, directed by John Cromwell and starring Tyrone Power in the title role, with Gene Tierney, George Sanders and Frances Farmer. The all star cast also includes John Carradine, Elsa Lanchester and a young Roddy McDowall. It is a thundering good story about a lost inheritance reclaimed and it is brilliantly acted. It stands up even today as first class entertainment.

We first meet the title character as a child played by Roddy McDowall. He is made a ward of his villainous uncle, played satisfyingly to the hilt by George Sanders.
The grown up Benjamin Blake is played by Tyrone Power. He escapes from his uncle's servitude and goes to the South Seas where he falls in love with native princess, Eve, played by an extremely beautiful Gene Tierney. Benjamin returns to England and after many adventures reclaims his inheritance, which he promptly gives away. He then returns to his island paradise to live happily ever after with Eve.

The film is based on the novel, 'Benjamin Blake' by Edison Marshall which appeared, in a condensed form, in 'Cosmopolitan' in April 1941.
The working title of the movie was unsurprisingly, 'Benjamin Blake' , and the onscreen subtitle is 'The Story of Benjamin Blake'.
Ida Lupino was originally cast as Isabel but she was replaced by Maureen O'Hara, who, after undergoing an emergency appendectomy, was in her turn replaced by Cobina Wright, Jr.. When Cobina became ill, Frances Farmer was loaned out by Paramount for the production.
This was Frances Farmer's last film before a tragic series of events in her life, including arrest, jailing and psychiatric confinement, which continued until 1950, when she was able to resume her career. During this time her mother became her legal guardian.
A complete scene in which Tyrone Power played Blake's father and was killed by the George Sanders character, was deleted from the final cut to add more suspense.
Background footage was shot in Honolulu and other location sequences were filmed at Busch Gardens in Pasadena, California.