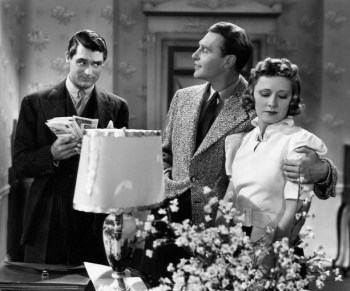 
'The Awful Truth' is a comedy movie made in 1937, directed by Leo McCarey and starring Cary Grant and Irene Dunne. The movie was based on the stage play written in 1922 by Arthur Richman, and which had been filmed twice before, in 1925 as a silent movie, starring Warner Baxter and Agnes Ayres and again in 1929, as a Talkie, starring Henry Daniell and Ina Claire. It was remade, less successfully, as 'Let's Do It Again' in 1953, with Ray Milland and Jane Wyman. In the hands of the experienced Leo McCarey, who worked with the Marx Brothers and Laurel and Hardy, it becomes a first class example of the screwball comedy.

The movie was commercially very successful and was praised by the critics. McCarey won the Best Director Academy Award and the movie received four further unsuccessful Oscar nominations including Best Picture, Best Actress for Irene Dunne, and Best Supporting Actor for Ralph Bellamy.

In 1996 'The Awful Truth' was selected by the Library of Congress for preservation in the United States National Film Registry.

Search Amazon for 'The Awful Truth'

Jerry and Lucy Warriner, played by Cary Grant and Irene Dunne, are due to divorce, because each believes that the other is being unfaithful. Lucy wins custody of Mr Smith, their dog, and before the legal divorce is completed they each try to ruin the other's chances to remarry.

Shooting took place in the extremely short period of six weeks between June and August, 1937.

Leo McCarey encouraged his actors to improvise on set as much as possible, which some found disconcerting. Cary Grant, in particular, was unhappy with McCarey's methods and actually tried to persuade the studio to exchange his role with that of Ralph Bellamy. He even offered Columbia $5000 to allow him to leave the film completely. Ironically, the film boosted his popularity with fans and gave him the negotiating power to immediately sign a lucrative three picture contract with RKO.

"Mr. Smith," the dog was an experienced performer. His real name on set was "Skippy," and he had starred as Asta in MGM's 'The Thin Man' series. He went on to further cinematic fame playing George in 'Bringing Up Baby' in 1938 and Mr. Atlas in 'Topper Takes a Trip' in 1939.