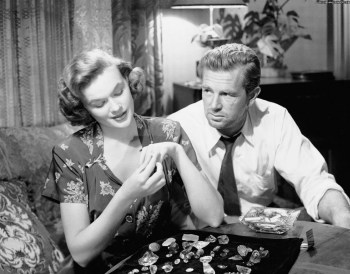 
'The Asphalt Jungle' is an exciting crime thriller film noir made in 1950, directed by John Huston and starring Sterling Hayden, Jean Hagen, Sam Jaffe, Louis Calhern and James Whitmore. It is notable for including a brief but star-making role for Marilyn Monroe. She was pictured on the posters but not mentioned by name.

The movie is based on the 1949 novel of the same name by W. R. Burnett and tells the story of a "caper", a group of criminals planning and taking part in a jewellery store robbery. It was nominated for four Academy Awards including Best Director for John Huston and Best Supporting Actor for Sam Jaffe but, in the vintage year of 'All About Eve' and 'Sunset Boulevard', won none.

In 2008, 'The Asphalt Jungle' was selected for preservation in the United States National Film Registry by the Library of Congress.

The film is regarded as a classic and has had a huge influence on the "heist movie" genre. Influences can be seen in the 1955 French film 'Rififi', in the early work of Kubrick, and, decades later, in Tarantino's 'Reservoir Dogs'. It was well received critically on release and was a commercial success.

Search Amazon for 'The Asphalt Jungle'

Harold Rosson's magnificent black-and-white cinematography starkly, yet vividly shot further enhances this film noir masterpiece and is complemented by the moving score by Miklós Rózsa which stays perfectly in the background and never becomes intrusive.

The plot concerns a criminal mastermind Doc Reidenschneider (played by the Oscar-nominated Sam Jaffe), who, on his release from prison, begins recruiting hoodlums for his plot to rob a jewellery store.

What makes 'The Asphalt Jungle' stand out is the concentration, not only on the robbery but also on the personal lives of the gang members, who are individualized with notable touches of dialogue and visual style and whose backgrounds are painted in memorable detail.

Reidenschneider's team includes Sterling Hayden's tough guy stick-up artist, Dix, who dreams of returning to the Kentucky farm life of his youth, a crooked bookie called Cobby (Marc Lawrence), Gus Minissi, a hunchbacked diner owner with a fondness for kittens who is hired as the getaway driver (James Whitmore) together with Jean Hagen's Doll, a woman with nothing but romantic illusions to cling to. The meticulously planned heist takes just 11 minutes; the meat of the film concerns the relentless double-crossing that follows.

The object of all their aspirations is a bag of gems which, much like the Maltese Falcon in Huston's film, proves to be unusable and, as in most Huston films, it is greed and a yearning for the unattainable that brings each character to his downfall and inevitable defeat by the law. The gang leader, Doc, is captured because he lingers in a café watching a beautiful young girl dance, and tough guy Dix bleeds to death as he tries to return to the country and the horses he loves. Such melodramatic elements contrast interestingly with the film's otherwise grim portrayal of alienation, betrayal, and sociopathy.

Walter Huston, the father of director John Huston, died of heart failure during the production. To ensure realism and accuracy in the robbery scene, Huston consulted genuine safecrackers on the set.
Casting
The part of Dix Handley was Sterling Hayden's first starring role and he got it despite rumors that he had serious alcohol and psychiatric issues and against the better judgement of MGM boss Dore Schary. Marilyn Monroe was still an unknown starlet and had not yet had a speaking role. As a result of the movie she was chosen to play Miss Caswell in 'All About Eve' later in the year.