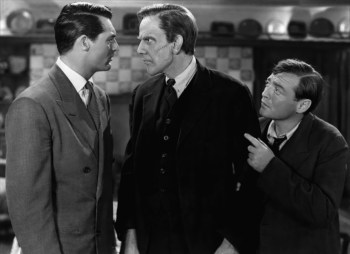 
'Arsenic and Old Lace' is a highly entertaining black comedy made in 1941 and released in 1944, directed by Frank Capra and starring Cary Grant, Josephine Hull, Jean Adair, Raymond Massey, and Peter Lorre. The movie was based on the stage play by Joseph Kesselring which ran for over three and a half years on Broadway from 1941. The screenplay was by Julius and Philip Epstein, a writing team with a first class record in movie adaptations.

The movie has been universally praised by critics and public alike although it was ignored by the Academy Awards Committee. In the American Film Institute's 100 Years... 100 Laughs it is ranked at number 30.

It is a genuinely funny movie with a wonderful dialogue and brilliant acting by the principals and supporting cast alike. It continues to be as popular with audiences today as it was when it was first made.

The movie has an unusual subject for a comedy film - multiple murders. The macabre subject matter is artfully and tastefully handled by Frank Capra so as not to cause anything other than hilarity in the audience.

Cary Grant plays drama critic Mortimer Brewster whose world gets turned upside down when he takes his new wife (Priscilla Lane) to his childhood home to meet the family and discovers that his two aged aunts are completely mad and have poisoned twelve elderly bachelors and buried them in the cellar. The aunts are sublimely played by Josephine Hull and Jean Adair. They are so joyously innocent and nonchalant about their twelve murders, that we only view them as eccentric old dears, and not as wicked murderers.

Cary Grant is at his best in this sort of manic role, trying desperately to keep a lid on the madness around him. His double takes and shocked expressions are wonderful to see. The supporting cast is first class with Peter Lorre in the role of a completely weird plastic surgeon, and Raymond Massey, as Jonathan, Grant's brother, who is also a serial murderer. The upside down surreal world is completed by John Alexander as Teddy, Mortimer's brother, who believes himself to be Theodore Roosevelt, Jack Carson, Edward Everett Horton, James Gleason and Garry Owen, all of whom play insanity to the hilt.

Josephine Hull, Jean Adair and John Alexander were recruited from the long-running stage production to recreate their roles in the film. The film was shot during an 8 week period in 1941 but Warners were legally obliged to wait until the play finished its run before releasing it. This they were unable to do until September, 1944.

Frank Capra, had earned a formidable reputation during the 1930's, having directed three Academy Award winning successes in 'It Happened One Night' in 1934, 'Mr. Deeds Goes to Town' in 1936 and 'You Can't Take It with You' in 1938. - and he had displayed an ability to make movies which combined great entertainment with a social message as in 'Mr. Smith Goes to Washington' in 1939. After 'Mr. Smith' he was looking for another outlet for his talents - a project that was pure entertainment without the "Capra-corn" social commentary, He found it on the Broadway stage in Joseph Kesselring's hit play, 'Arsenic and Old Lace'.

Kesselring wrote the play in 1939 and it has become one of the most popular and widely performed in the world, having been translated into many languages and adapted for television in 1954 and 1969.

Capra originally planned to shoot the movie in just four weeks for a cost of $400,000. It actually took nearer to eight weeks to shoot and the budget was a far more realistic $1million.

After shooting was completed the film's release was put on hold for over 3 years, until September, 1944, because of a clause in the film's rights contract which stipulated that it could not be released whilst the play was still running. As the play had 1,444 performances and ran for over three and a half years, the release date of the movie was considerably held up.

At the outset Capra planned to cast Bob Hope in the role of Mortimer, but as Hope was not available, Cary Grant was borrowed by Warner Brothers from Columbia for the production. His role was expanded by the Epsteins to make it more commensurate with his star billing. Grant considered it the least favourite of all his films and thought his over-the-top performance an embarrassment. Audiences around the world thought otherwise. Grant donated most of his payment from the movie to the British and American war effort.

Josephine Hull, Jean Adair and John Alexander were recruited from the Broadway play to re-create their stage roles. At the end of filming they returned to the play, which ran for a further three years.

The result of the brilliant cast, wonderful script and sensitive direction is a quite magnificent, classic comedy, one of the best in cinema history.