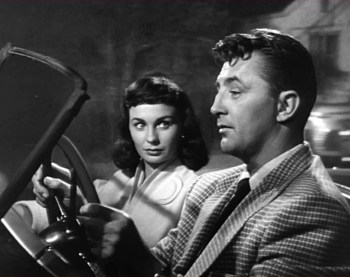 
'Angel Face' is a film noir crime drama, made in 1952, the last noir directed by Otto Preminger and starring Robert Mitchum and Jean Simmons.

Although not well received on its initial release, 'Angel Face' has grown steadily in reputation. It was originally made, on the instructions of studio head Howard Hughes in order to fulfil Jean Simmons's contract at RKO and it is Simmons's falsely angelic character which drives the movie.

The American film noir movement is dominated by doomed romances and powerfully manipulative femmes fatales, who lure gullible men to their destruction. Otto Preminger's 'Angel Face' appears late in the series and obviously owes much to earlier films such as Jacques Tourneur's 'Out of the Past' from 1947. This features Robert Mitchum in a similar role as a private investigator who discovers, but cannot escape from, the machinations of the amoral woman he loves. 'Angel Face' is more cynical and sardonic than its predecessors. It traces the obsession of a working-class man, Frank Jessup (Mitchum), for a beautiful rich woman who involves him in a plot to murder her stepmother. Earlier, Diane Tremayne, the eponymous cherub (Jean Simmons, cast very effectively against type) had deliberately broken up Frank's engagement to Mary (Mona Freeman), the 'good' woman who represents a normal life that is no longer enough for Frank once he meets Diane and develops a taste for rich living.

The murder plot succeeds, but only at the additional and unexpected cost of the life of Diane's father. Diane, however, never feels a twinge of guilt, and nothing derails her plans. The couple are indicted for what is soon suspected to be a crime, but, in the tradition of 'The Postman Always Rings Twice', they are acquitted because of the shyster lawyer she hires to defend them who successfully depicts them as innocent lovebirds.

Though seemingly destined for a life together, Frank finally has an attack of conscience. He attempts to break with Diane after the trial and resume his previous life. In a gesture that dooms him (again recalling Mitchum's role in 'Out of the Past'), Frank allows Diane to drive him to the bus station. But she would rather die than give him up. Diane backs the car over a cliff, killing them both, in a gesture that recalls the 'accident' she plotted earlier.

The film rights to the story were sold in 1947 by writer, Chester Erskine to Belsam Pictures with Edmond O'Brien originally intended to play the Mitchum role. Howard Hughes, head of RKO, acquired the rights in 1952 and to direct, he borrowed Otto Preminger from Twentieth Century-Fox.

Preminger at first hated the script and refused to take part. He was persuaded by Howard Hughes himself. Hughes felt he had a score to settle with Jean Simmons, Not wanting to make another picture for Hughes, Simmons had cut off her hair, knowing his liking for actresses with long hair. Hughes told Preminger he could have complete control of the script and the picture, so long as Simmons wore a long black wig throughout the picture and provided the filming be completed in eighteen shooting days, so that he could get one more film out of her before her contract termination date. Preminger accepted the terms. Howard Hughes was not a man to cross.

In the end it could be argued that Simmons won the battle, as she gave one of the most intense, and strongest performances of her career.and finished the movie with her star shining brighter than ever.

At Preminger's insistence the script which he disliked so much, was quickly rewritten by Frank Nugent and Oscar Millard

There are two spectacular car-crash scenes which are fundamental to the plot. Bothe were filmed in Beverly Hills at Cielo Drive and Davies Drive.

Part of the film's chilling strength comes through the stormy minor-key piano soundtrack, part of a masterful score by Dimitri Tiomkin.