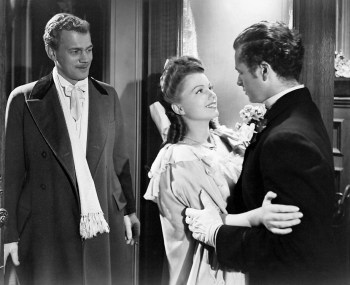 
''The Magnificent Ambersons' is a dramatic movie made in 1942, written and directed by Orson Welles, and starring Joseph Cotten, Dolores Costello, Anne Baxter, Tim Holt, Agnes Moorehead and Ray Collins. Welles himself provides the voiceover narration in this, his second feature film. Based on the 1918 novel by Booth Tarkington, the movie is generally regarded as another Welles masterpiece and was his follow up to his masterly movie debut the previous year with 'Citizen Kane'.

Controversy surrounded the control and editing of the movie and the final version, with an artificially happy ending added and more than an hour of footage cut by RKO, differed considerably from Welles's own intention.

The film lost over $600,000 on a budget of $1 million, and represented a huge loss for a small studio like RKO. Nevertheless, even in its much altered form, the film is now regarded as among the best American films ever made, as is Welles's first film, 'Citizen Kane'. It was nominated for four Academy Awards: Best Picture, Best Supporting Actress (Agnes Moorehead), Best Black and White Cinematography (Stanley Cortez), and Best Black and White Interior Decoration.

In 1991, 'The Magnificent Ambersons' was selected for preservation in the United States National Film Registry by the Library of Congress.

The plot of 'The Magnificent Ambersons' covers two generations and is set in a middle-class Mid-Western American town at the turn of the century. A number of dramatic stories tell the tale of the decline and fall of the aristocratic Amberson family in direct contrast with the rise in fortunes of the Morgan family with the coming of the industrial age. The Morgans become wealthy and prosperous and eventually become the rescuers of the Ambersons.

Orson Welles originally adapted Booth Tarkington's novel for a one hour radio play by the Campbell Playhouse in October, 1939. The cast include Welles himself, Walter Huston, Ray Collins and various members of the Mercury Theater company.

After 'Citizen Kane' in 1941, Welles revelled in new cinematic techniques and used them in his new movie. The set of the Amberson's mansion was constructed like a real house, but with walls which could be rolled back, raised or lowered to allow the camera to appear to pass through them in one continuous take. It was one of the most elaborate and expensive sets ever built at the time and was subsequently used by RKO for other films.

Welles similarly used such innovations as overlapping dialogue, deep-focus photography, flowing tracking and dolly shots, crane shots and long takes. The snow ride scenes were filmed in an abandoned icehouse instead of the normal RKO stage. However, the filming equipment kept freezing up and jamming and because of this everyone involved, except for Welles himself, contracted a bad head cold.

Before shooting began, Welles spent five weeks rehearsing his actors. Whilst directing the movie during the day, he spent the evenings on a completely different project, 'Journey Into Fear', in which he played a Turkish policeman.

Welles spent five days rehearsing the actors for the kitchen scene when Fanny is teased about her infatuation with Eugene Morgan. There was no written script. Instead Welles asked the actors to improvise for the four minutes of the scene. They did the whole scene in a single take.

Most of the film's dialogue was redubbed after shooting finished, due to noise from the moving camera and crane shots. This added $25,000 to the budget. Overall, the film finished more than $200,000 over budget and 14 days behind schedule.

Although now considered a masterpiece,the film was a disaster on its preview showing. The overall atmosphere of the movie is one of loss, of a way of life that is gone forever, and the original unhappy ending was off-putting to wartime audiences seeking a more upbeat cinematic escape. RKO had invested heavily in the picture and they took control of the final edit away from Welles who had left America to work in Brazil on a film called "It's All True" (which was never completed).

Welles was bitter about the new ending, feeling it spoilt his film. Interestingly the tacked on film ending is almost identical to the ending of the novel.