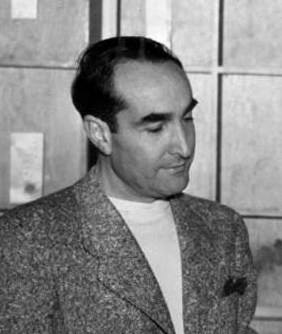 
Irving Rapper was an American film director born in England. After beginning his movie career as a dialogue coach, he enjoyed a long, successful directorial career, and is today best remembered for a series of high quality films he made in the 1940's, starring Bette Davis.

Irving Rapper was born in London on January 16, 1898, and emigrated with his family to New York when he was eight years old. He became interested in the theater whilst still at school and even when studying law and journalism at New York University, he indulged his interest by joining the Washington Square Players as an actor. He soon gravitated to stage management and directing and began a successful directorial career on Broadway.

In 1930 Rapper was invited to London to direct 'Five Star Final' by Louis Weitzenkorn and he returned to America with producer Gilbert Miller to work with him on a production of Philip Barry's 'The Animal Kingdom'. He established a reputation for reliability and integrity and many of his Broadway shows were commercially successful.

He was brought to Hollywood by Warner Brothers in 1936 and began a long learning process in the art and techniques of filmmaking. He was first employed as a dialogue coach. From the mid 1920's, with sound movies just beginning, many top silent movie directors particularly the European immigrants such as Hungarian Michael Curtiz and the Russian Anatole Litvak, had need of assistance to help perfect English language dialogue.

Rapper initially worked as assistant director and dialogue coach to the German William Dieterle, on several of Dieterle's top quality movie biographies such as 'The Story of Louis Pasteur' in 1936, 'The Life of Emile Zola' in 1937 and 'Juarez' in 1939. He also worked with Michael Curtiz on 'Kid Galahad' in 1937 and 'The Private Lives of Elizabeth and Essex' in 1939, and with Anatole Litvak on 'All This and Heaven Too' in 1940. He learned much during his long apprenticeship and several times turned down opportunities to direct 'B' movies, knowing that it was too easy for an aspiring young director to be classed for his whole career as a 'B' movie director.

He took his first directorial assignment in 1941, an 'A' list melodrama, 'Shining Victory' starring James Stephenson and Geraldine Fitzgerald, which proved to be a modest success. His second movie, 'One Foot in Heaven', also in 1941, starring Fredric March and Martha Scott, was much more successful and was nominated for the Best Picture Academy Award.

After directing Barbara Stanwyck in 'The Gay Sisters' in 1942, Rapper made his first film later that year with the mercurial Bette Davis, and it was the film which made his reputation. In 'Now, Voyager' Bette Davis gave one of her finest performances and she and Gladys Cooper (who played her mother) received Oscar nominations. The film was a major commercial success and Rapper's reputation was made.

Rapper, although he found Bette Davis a difficult woman to deal with, later worked with her on three further movies: 'The Corn Is Green' in 1945, 'Deception' in 1946 and 'Another Man's Poison' in 1951. After a biopic of George Gershwin, 'Rhapsody in Blue' in 1945, in 1947 he directed Eleanor Parker and Ronald Reagan in the comedy 'The Voice of the Turtle' after which he left Warner Brothers when his contract expired.

After Warner Brothers Rapper's career path as a freelance director slowed. He made a total of 13 films after leaving the studio and never reached his earlier heights. His handling of 'The Glass Menagerie' in 1950 was widely praised but many of his projects contained miscast performers. For instance his original choice for the role of Amanda Wingfield in 'The Glass Menagerie' was Tallulah Bankhead but Gertrude Lawrence, better known for comedy than drama was chosen by the studio. Similarly Natalie Wood was not suited to the title role in 'Marjorie Morningstar' in 1958 and Carroll Baker was not convincing as a nun in 'The Miracle' the following year.

Rapper's own favorite out of all his movies was 'The Brave One' made in 1956, which is best known as the film for which the blacklisted Dalton Trumbo, under the pseudonym of Robert Rich, won an Oscar for Best Story.

In the early 1960's Rapper travelled to Italy and in 1962 directed two Biblical themed films, 'Pontius Pilate' and 'The Story of Joseph and His Brethren' neither of which were commercially or critically successful. He returned to America and made only two further films, neither of which was well-received, 'The Christine Jorgensen Story' in 1970, and 'Born Again' in 1978.

Rapper, who was homosexual, never married. He lived at the Woodland Hills Actors' Retirement Home from 1995. He died on December 20, 1999, aged 101 years.

1944
The Adventures of Mark Twain

1953
Forever Female
Bad for Each Other

1956
Strange Intruder
The Brave One