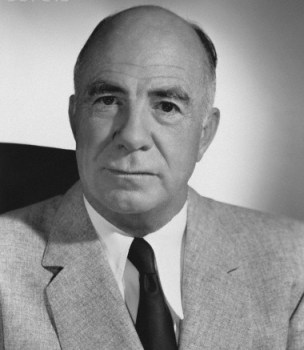 
Gregory La Cava was an American film director best known for his classic 1930's comedies such as 'She Married Her Boss' in 1935, 'My Man Godfrey' in 1936, and 'Stage Door' in 1937. He worked with many of the top actors of the period and directed 8 actors in all to Academy Award nominations including 4 separate acting nominations for 'My Man Godfrey'.

He started in the early days of cinema as a cartoonist and moved to feature directing in the 1920s, but through excessive drinking his output dropped after his peak creative period in the 1930's and he made only one movie after 1942. He was a longtime friend of W C Fields who referred to him as having " the best comedy mind in Hollywood".

He was born on March 10, 1892, in Towanda, Bradford County, Pennsylvania. As boy he showed great natural ability as an artist and when he left school he began to study painting at the Art Institute of Chicago and the Art Students' League of New York but had to curtail his studies in order to contribute to the family finances.

In his late teens he began working as a newspaper reporter in Rochester, New York, and was able to use his considerable artistic skills to move on to work as a cartoonist for two papers, the New York Globe and the Evening World.

Success as a cartoonist led, after two years, in 1913, to animated movie work at the studio of the innovating silent era animator, Raoul Barré. His abilities impressed Barré and within two years he was one of the principal animators on the popular "Animated Grouch Chaser" series.

When multi-millionaire and newspaper magnate, William Randolph Hearst, started a rival animation studio in 1915, called International Film Service, he hired most of Barré's animators, including La Cava, whom he made editor-in-chief of the new organisation, recognising his great organisational abilities. Cava stayed with Hearst until the animation company was closed in 1918 and was given directorial credit for all of the IFS cartoons. They were the first comic strip properties to accredit properly the director and animators, as opposed to just the creator of the comic.

In 1918 La Cava transferred to the competitors, Bray Productions, to whom Hearst had granted licences to make the IFS cartoons. The deal lasted from 1919 to 1921, when the IFS-Bray agreement broke off, with the final few cartoons released in early 1921. La Cava had finished with animation. He wanted to work in live action movies.

La Cava moved to Hollywood in 1921 and started his live movie career as a gag writer. His directorial debut soon came with 'His Nibs' in October, 1921, starring Colleen Moore and he went on to direct a series of short comedies including 'A Social Error' in 1922, 'Helpful Hogan' and 'The Fiddling Fool' in 1923, and 'Restless Wives' and 'The New Professor' in 1924.

He signed with Paramount studio in 1924 and continued to direct feature silents for the rest of the decade working with top stars such as Bebe Daniels, Richard Dix, a young Gary Cooper and William Powell. He directed W. C. Fields in the classic 'Running Wild' in 1927 and the two became close friends. La Cava learned his trade well and built up a reputation for reliability and as a man who could be trusted and respected by actors. His hard work would bear fruit and flourish in the following decade.

La Cava left Paramount in 1929 after 5 years and began his Talkie career with 'Saturday's Children' for First National later the same year. He joined Pathé and made two movies for them before they were merged with RKO in 1931 and he began making movies for RKO. He made films in a variety of genres such as comedies, 'Laugh and Get Rich' and 'Smart Woman' in 1931, dramas, such as 'Symphony of Six Million' in 1932 and romances, as in 'The Age of Consent ', also in 1932 and 'Bed of Roses' in 1933. He left RKO in 1933 to operate as a freelance director.

As a freelance he directed two films for for Twentieth Century Pictures, then in 1934 he made 'What Every Woman Knows', starring Helen Hayes. In the same year he directed the 'The Affairs of Cellini', which earned four Oscar nominations, including Best Actor for Frank Morgan and in 1935 he directed Claudette Colbert to a Best Actress Oscar nomination for her performance as a female psychiatrist in 'Private Worlds'. La Cava was now firmly established as a top class Hollywood director, and his best works were still to come.

In 1936 La Cava created a classic screwball comedy, 'My Man Godfrey', which starred Carole Lombard at her brilliant best, in her only Oscar-nominated role, and which earned six Academy Award nominations altogether, including Best Director for La Cava.

He followed this major success with another brilliant creation, 'Stage Door' in 1937, an adaptation of a Broadway play about a boardinghouse for actresses and chorus girls. The movie featured an all-star cast led by RKO's top female stars, Katharine Hepburn and Ginger Rogers, and received four Oscar nominations including Best Picture and again, Best Director for La Cava. It was the peak of La Cava's career. He never again reached these heights.

La Cava next worked on two more films with Ginger Rogers, 'Fifth Avenue Girl' in 1939 and 'Primrose Path' the following year, both of which were well received. His next two movies, 'Unfinished Business' in 1941 and 'Lady in a Jam' in 1942, both starring Irene Dunne and both comedies, did not fare well and marked the beginning of the end of his promising career.

La Cava had been a heavy drinker for many years and as the disease took hold, his, once impeccable, reputation for reliability became tarnished. Like his friend, W C Fields he made regular visits to sanatoriums to dry out but he received no movie offers for five years. When he finally returned to the big screen in 1947, it was to make one last credited film, strangely a musical, 'Living in a Big Way' starring Gene Kelly. The movie ran over budget and flopped at the box office.

In 1948 La Cava worked on the comedy 'One Touch of Venus', starring Ava Gardner, but was replaced early in the shoot by William A. Seiter.

La Cava married twice, firstly to Beryl Morse Greene for six years from 1924. The couple had one child before divorcing in 1930. His second marriage was in 1940 to Grace Nicholls. The couple divorced in 1945.

1923
The Four Orphans (Short)
The Busybody (Short)
The Pill Pounder (Short)
So This Is Hamlet? (Short)
Helpful Hogan (Short)
Wild and Wicked (Short)
The Fiddling Fool (Short)
The Life of Reilly
Beware of the Dog

1931
Laugh and Get Rich
Smart Woman

1933
Gabriel Over the White House
Bed of Roses
Gallant Lady

1934
The Affairs of Cellini
What Every Woman Knows

1935
Private Worlds
She Married Her Boss