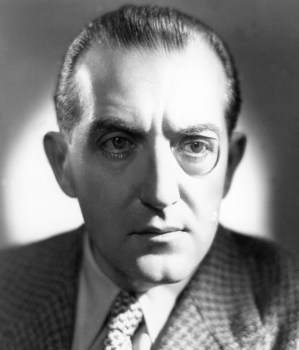 Fritz Lang was an Austrian movie director, producer, actor and screenwriter. He was part of the German Expressionist school and is the most famous film maker from the German-speaking world. Some of his early films have been likened to early films noirs and in England he was known as the "Master of Darkness".

He was born Friedrich Christian Anton Lang in Vienna, Austria on December 5, 1890. His father was an architect and building company manager and Friedrich and his elder brother were brought up in the Catholic faith.

As a child Lang enjoyed showed artistic talent and when his schooling finished he spent a year studying architecture and then, when he was 17, began to study art, intending to become a painter. He put his education on hold for several years to travel round Europe and resumed his art studies in Paris in 1913.

In 1914 at the start of WWI, Lang returned to Vienna and volunteered to serve in the Austrian army. He served for the duration of the war and fought on the Russian front. He was wounded three times and suffered from shell shock, and was eventually discharged in 1918 with the rank of lieutenant.

It was whilst convalescing from his wounds that Lang made his first efforts at writing screenplays and his first credited film was 'Die Peitsche' in 1916. He had further success the following year when he worked as screenwriter on several films for Viennese director, Joe May.

After leaving the army in 1918 Lang was employed by the Decla film company headed by Erich Pommer, a leading figure in the dynamic German film industry. Lang had a steep learning curve and continued to write screenplays whilst also acting in a variety of minor roles and in 1919 he directed his first feature film 'Halbblut' ("The Half-Castle"). Later the same year he had his first major success with 'Die Spinnen' (The Spiders), an adventure thriller, which he followed by a popular sequel 'Die Spinnen, 2. Teil - Das Brillantenschiff' in 1920.

In 1921 Lang made his first serious Expressionist film, the allegorical work 'Die Mude Tod' ('Destiny') which established him as a filmmaker of high quality. His next film created a sensation. 'Doktor Mabuse, Der Spieler' ('Dr Mabuse, the Gambler') in 1922, was an action-packed gangster story which introduced one of cinema's first evil genius super-criminals. The film propelled Lang into the top rank of movie directors.

Lang had been helped in the screenplay by his second wife, Thea Von Harbou, and the two then began a series of celebrated films, beginning in 1924 with 'Die Nibelungen', an adaptation of the Siegfried saga, a 5 hour epic in two parts. It was followed by the even more ambitious 'Metropolis' three years later.

'Metropolis' was an innovative movie of immense ambition but it was such a failure at the box office that it bankrupted Ufa the nationally financed production company that had taken over Decla. It is nevertheless a major monument to silent film making at its very best and its futuristic imagery is still influential with film makers today.

The financial failure of 'Metropolis' caused Lang to work on smaller projects, such as the action movie 'Spione' ('Spies') in 1928 and the science fiction thriller 'Die Frau im Mond' ('The Woman in the Moon') the following year. With the arrival of sound he and Von Harbou scrupulously spent the next two years crafting the screenplay for 'M', arguably Lang's greatest movie.

'M' tells the compelling story of a serial child murderer and was based on an actual killer being hunted by the German police even as the story was being written. The movie was far more realistic than the fantasies which Lang had previously created and would typify his work for the rest of his career.

Rise of the Nazis

When Adolf Hitler was made Chancellor of Germany in 1933, the Nazi party began to suppress opposition and to consolidate their power which included controlling artistic expression. Lang's next film 'Das Testament des Doktor Mabuse' (' The Testament of Dr. Mabuse') was banned by them for containing anti-Nazi phrases. Lang had a personal meeting with Goebbels who, according to Lang's account, offered to make him head of German cinema. Lang prevaricated, partly because his own mother had been Jewish before she converted to Catholicism.

Lang's wife, Thea von Harbou, was sympathetic to the Nazi cause and in 1933 she and Lang divorced. The following year Lang left Germany and after a brief period in Paris where he directed 'Liliom' in 1934, moved to America where he would stay for the next 20 years.

Lang was part of a wave of refugees from Nazi Germany and needed time to establish himself. He was hired by David Selznick of MGM and in 1935 he became a naturalised American citizen. His first movie in America was 'Fury' in 1936, starring Spencer Tracy which was well received and established him in his new country.

His next film, 'You Only Live Once' in 1937, was also successful and also a crime drama, starring Silvia Sydney and the young Henry Fonda, but his following film, the musical 'You and Me' in 1938 was a box office disaster. For a year Lang found work hard to come and suffered bouts of depression. He managed to revive his career by changing genres when he made two Westerns, 'The Legend of Frank James' in 1940 and 'Western Union' in 1941. He then returned to the darker, film noir genre with 'Man Hunt' later in 1941 and 'Hangmen Also Die!' the following year.

'The Woman in the Window' was one of Lang's finest works. It is a archetypal film noir, a mysterious tale of murder and blackmail starring Edward G. Robinson.

After this came a series of disappointing 'B' movies such as 'Scarlet Street', in 1945, 'Secret Beyond the Door' in 1948 and 'The House by the River' in 1950 before he returned to form once again with a popular Western, 'Rancho Notorious' in 1952, starring Marlene Dietrich. He followed up in 1953 with a masterpiece of the film noir genre, 'The Big Heat', starring Glenn Ford, Gloria Grahame and Lee Marvin. The film was tightly constructed and contains all the typical Fritz Lang ingredients: suspicion, ever-rising tension, paranoia and violence.

Lang finished the Hollywood chapter of his life with three more films noirs of high quality, 'Human Desire' in 1954, 'While the City Sleeps' and the complex thriller, 'Beyond a Reasonable Doubt' in 1956.

Aged 66, Lang was becoming disillusioned with the lack of artistic freedom in Hollywood and was considering retirement, but in 1957 he was persuaded by German producer Artur Brauner, to return to Germany to add a final chapter to his life. Back where his career had taken off Lang made two films which became known as his "Indian Epics", 'The Tiger of Eschnapur' and 'The Indian Tomb', both in 1959.

Neither film reached the heights of his earlier successes, despite a large budget. In 1960 Lang directed his final film, 'Die tausend Augen des Dr. Mabuse' ('The 1000 Eyes of Dr. Mabuse') which renewed public interest in his master criminal and which spawned several movie sequels, none of which were made by Lang.

Lang was adept at self promotion and although he could be personally charming he was one of the most disliked directors in Hollywood. Some performers refused outright to work with him.

He was a ladies man and had affairs with many women. He was married three times, firstly to Lisa Rosenthal. Little is known about her but their marriage ended with her death in 1920 when she was found with a gunshot wound to the chest. The official verdict was suicide although suspicion of murder fell initially on Lang and his then mistress, Thea von Harbou, who lived in the same building.

Lang then married von Harbou and the two forged a fruitful screen writing partnership including the brilliant 'Metropolis' and 'M'. They divorced in 1933 shortly before Lang left Germany for Hollywood. The split can partly be explained by von Harbou's openly Nazi sympathies and partly due to Lang's closeness to Lily Latte, who much later, in 1971, became his third wife. Latte lived with Lang and acted as his personal assistant from 1931 up to his death.

As well as his marriages, Lang had many affairs and never seemed to be able to remain faithful to one woman. His name was linked to Marlene Dietrich, Joan Bennett and Kay Francis amongst others.

'The 1000 Eyes of Dr. Mabuse' proved to be Lang's final film. His eyesight was deteriorating and he returned to Hollywood and lived quietly, following his passionate hobby of collecting primitive art.. He served as jury president at the Cannes Film Festival in 1964 although he was nearly blind by then.

Fritz Lang died from a stroke at home in Beverly Hills on August 2, 1976. He was buried in Forest Lawn, Hollywood Hills Cemetery. He was 85 years old.

Lang's career had two significant phases. Firstly in Germany as a proponent of Expressionism and then in Hollywood as one of the originators and perfectors of film noir. His movies were extremely influential to a whole group of succeeding directors from Orson Welles and Alfred Hitchcock to Woody Allen and Martin Scorsese. Fritz Lang's impact on the word of filmmaking was huge.

1940
The Return of Frank James

1944
Ministry of Fear
The Woman in the Window

1950
House by the River
American Guerrilla in the Philippines

1953
The Blue Gardenia
The Big Heat

1956
While the City Sleeps
Beyond a Reasonable Doubt

1959
Tiger of Bengal
The Tomb of Love