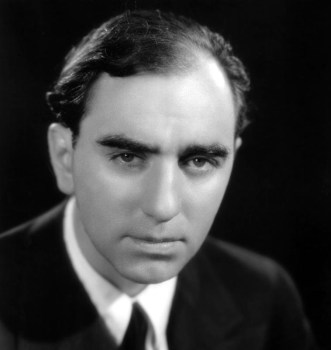 Busby Berkeley is one of the most famous names in Hollywood history. The elaborate dance routines and lavish sets which he created are justly part of Hollywood folklore. No-one can forget the kaleidoscope of interweaving patterns made by tens or hundreds of dancing girls in a typical Busby Berkeley musical. He was one of cinema's great pioneers and his influence extends to this day in a wide variety of fields, from television commercials to modern stage and movie musicals.

Berkeley made his name as a dance director on the Broadway stage and then, after the introduction of sound into movies, became a genuine innovator in the choreography of filmed dancing, with the imagination to see beyond the traditional confines of the theatre. He had an intuitive feel for how the movement of dancers would look on film and he popularised the high overhead shot making it his own trademark style as well as being the first director to also use close ups of his dancers' faces.

It is strange but true that Busby Berkeley never had a dancing lesson and, in his early days, he was very afraid of people finding out. He often drove his colleagues to distraction by his habit of sitting in front of a new set for days at a time thinking up ways of using it to best advantage.

He was nominated three times for the Academy Award for Best Dance Direction in successive years in 1936,1937 and 1938.

Busby Berkeley was born William Berkeley Enos on 29 November, 1895, in Los Angeles, California into a theatrical family. Both his parents were actors and his father was also director of the Tim Frawley Repertory Company. William had one brother, George, older by ten years, and his nickname as a child was "Buzz" which developed into Busby as an adult, after an English actress family friend, Amy Busby.

His father died when Buzz was eight and he was sent to various boarding schools to fit in with his mother's acting schedule. From the age of 12 he was educated at the Mohegan Lake Military Academy near Peekskill, New York and after graduating in 1914 he took a job as a management trainee for a shoe making company in Athol, Massachusetts, whilst earning money playing semi-pro basketball. After work he did some amateur acting and managed a local band. Management trainee programs today can be pretty comprehensive compared to those in Busby's day. Large title loan companies like Title Max include training in a variety of soft skills in addition to the specific skills required for a position.

After 3 years, in 1917, he joined the US Army where he started his musical and directorial career, organising parade drills in Chaumont, France for the US and French armies. He spent time in the Air Corps at the end of the first World War, as an aerial observer, which later proved invaluable for his visualisation of shots from an overhead camera. At the end of the war Berkeley spent some time in Germany as a member of the U.S. 3rd Army of Occupation, working as an assistant entertainments officer.

On demobilisation in 1919 he returned to New York and became a professional touring actor, also often working behind the scenes as a director and stage manager. He spent several years touring New England and the mid Atlantic states, directing and performing, sometimes doing a fresh show each week. He built a reputation as a strong and capable organiser and in 1925 he choreographed his first ever production on Broadway, a musical called 'Holka Polka'.

Berkeley's talent was evident and he quickly became one of the top choreographers on Broadway. His first major success as a dance director was in a Rodgers and Hart production of 'A Connecticut Yankee in King Arthur's Court' in 1927 and during the next few years he was dance director of seventeen Broadway productions including 'Present Arms' in 1928, 'Street Singer' in 1929, and 'The International Review' and 'Sweet and Low' in 1930. His reputation as a top Broadway dance director was made and it was not long before the burgeoning Hollywood film machine, with sound movies developing, realised that the talented young man was just what they needed for the developing new art form - movie musicals.

Berkeley was invited by Sam Goldwyn in 1930 to move to Hollywood to work for MGM on the Eddie Cantor musical 'Whoopee!'. He realised that the jobs of dance directors, movie directors and movie editors, up till then done separately, could be combined and done by one person - himself - and he persuaded Sam Goldwyn to let him do it.

Over the next five years Busby achieved international fame and reigned supreme as the pre-eminent dance director and choreographer of Hollywood musicals, experimenting and developing exciting new techniques in each new film, such as the overhead shot, or the close up of individual girls and the use of just one camera, placing it in unusual positions to make the audience a participant in the action, without a fixed perspective.

He worked on several successful musicals for MGM, such as 'Palmy Days' in 1931 and 'Girl Crazy' in 1932, before moving to Warner Bros. after being asked by Darryl F. Zanuck, head producer there, to direct the musical side of their next project, called '42nd Street'. The studio was struggling and on the brink of folding and needed a big hit. And they got it. The movie, starring Ruby Keeler and Dick Powell, was a smash hit with the public and and resolved the studio's financial situation. As a result Berkeley was rewarded with a seven year contract with Warners, along with the composer Harry Warren and the lyricist Al Dubin.

For the next few years he continued to create some of the most memorable musical numbers Warner Brothers ever produced in such musicals as 'Footlight Parade' and, in his directorial debut, 'The Gold Diggers of 1933', both in 1933. In 'Gold Diggers of 1935' two years later, he choreographed a chorus line of 150 girls in the unforgettable "Lullaby of Broadway" number, considered by many to be his masterpiece.

Berkeley continued to make movies for Warners until 1939 when he rejoined MGM and directed and choreographed four highly successful Judy Garland/Mickey Rooney musicals including the classic ''Babes in Arms' in 1939, 'Strike Up the Band' in 1940 and 'Babes on Broadway' in 1941. In addition, at his insistence he was given the chance to direct the non-musical crime drama, ''They Made Me a Criminal'' in 1939 with John Garfield. The film was well received but Berkeley did not entirely shed his musical director image with it.

He also directed the first Garland/Gene Kelly film, ' 'For Me and My Gal'' in 1942 and the Gene Kelly hit ''Take Me Out to the Ball Game'' in 1949. In the early 1950's he worked on some of the Esther Williams hits such as 'Million Dollar Mermaid'' in 1952, conceiving some of the most memorable water ballets ever filmed. In total, from 1930, he directed or choreographed over fifty Hollywood musicals, but he then he went into an enforced retirement as studio and public tastes changed and a new, harder-edged realism gained popularity.

The nostalgia movement of the 1960's brought him back into public consciousness as many of his films were revived and enjoyed. He returned to Broadway in 1971 to direct the smash hit 'No, No Nanette'' and he made successful tours of the college and lecture circuit.

Berkeley had a stormy personal life. He was a heavy drinker and in 1935 was involved in a serious road accident in which three people were killed. Berkeley was driving under the influence of drink and a witness saw him change lanes and crash head-on into another vehicle. He was tried for second degree murder and after two hung juries he was finally cleared of all charges following a third.trial. The case caused a sensation and the publicity badly affected Berkeley's subsequent career.

He was devoted to his mother with whom he lived until her death in 1946, after which he twice attempted suicide. Rumours abound that he was gay although he married six times to a variety of actresses and showgirls. He was survived by his last wife, Etta Dunn. He was also briefly engaged to the actress Carole Landis in 1939, but broke off the engagement, supposedly at the insistence of his mother.

Busby Berkeley died in Palm Desert, California at the age of 80 on March 14, 1976. He is buried in the Desert Memorial Park near Palm Springs, California.

1932
The Kid from Spain (choreographer)

1942
Calling All Girls
For Me and My Gal

1948
Romance on the High Seas (choreographer)

1950
Annie Get Your Gun (uncredited)
Two Weeks with Love (choreographer)