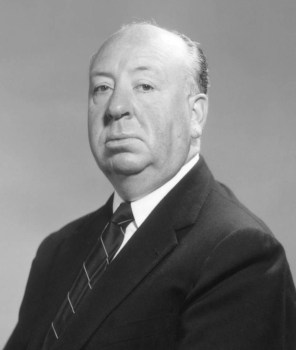 
Alfred Hitchcock was a film director and producer of immense influence. In a career of almost sixty years he pioneered many cinematic techniques and specialised in the suspense and psychological thriller genres with a unique blend of tension, confusion and humor. His career spanned both both silent films and talkies, and included classic thrillers such as 'Shadow of a Doubt' in 1943, 'Rear Window' in 1954 and 'Psycho' in 1960.

During his lifetime Hitchcock became one of the best known and most successful of all Hollywood directors and his movies are still immensely popular today. Surprisingly, he never won a Best Director Academy Award, although nominated five times between 1940 and 1960. At the 1967 Oscars he was awarded the Irving Thalberg Memorial Award.

Alfred Hitchcock was born Alfred Joseph Hitchcock in Leytonstone, Essex, England, on 13th August, 1899, the youngest of three children. His father, William, was a greengrocer and the family were comfortably off. Alfred was brought up as a strict Roman Catholic and was educated first at Salesian College, London and then the Jesuit St Ignatius' College in Stamford Hill, London. He would later recall his childhood as lonely and strictly disciplined by his parents. He developed an interest in the theater and cinema and also read voraciously, particularly classics by Dickens, Poe, Wilde and Flaubert.

Hitchcock's father died in 1914 and in the same year Hitchcock left school and began a course at the School of Engineering and Navigation in Poplar, London. On graduation in 1915 he became a draughtsman and estimator for the Henley Telegraph and Cable Company. He continued to study at night school, taking lessons in lessons in draughtsmanship and drawing at the University of London.

His first movie-related employment came in 1919 when he joined the American production company Famous Players-Lasky when it began making films in Islington in north-east London, not far from his home. He began by designing and illustrating title cards for silent films and he also learned the basics of movie making, script writing, editing and art direction, and he learned quickly.

By 1922 he was assistant director and in that year he had his first try at directing. His first film was never finished due to financial problems, and was called, appropriately, 'Number 13'. When the Lasky studio was taken over by Gainsborough Pictures in 1924 Hitchcock's responsibilities widened and he gained invaluable experience in a range of jobs including film editor, set designer, writer and as assistant to Gainsborough's top director, Graham Cutts.

Hitchcock's rapid rise culminated in 1925 in his own first solo directing assignments, 'The Pleasure Garden' and 'The Mountain Eagle', both of which were filmed in Munich as part of a co-production deal with the German producer Erich Pommer.

Neither film made much impact and Hitchcock's breakthrough film was his next one, 'The Lodger' made in 1926, and released in January 1927. The film was a major success both commercially and critically and remains a brilliant example of the art of silent movie making. The subject was a Jack the Ripper murder story and many of Hitchcock's typical movie elements were introduced: suspicion, intrigue, dry humor and an innocent protagonist falsely accused.

Whilst working in England on 'Number 13' Hitchcock met Alma Reville who became his assistant and whom in 1926, he married. She collaborated with him an many of his movies and their daughter, Patricia, acted in a number of his movies and TV shows.

Hitchcock continued his successful career start and won praise and international respect for a series of high quality thrillers. He became the most successful movie director in England with films such as 'The Man Who Knew Too Much' in 1934, 'The 39 Steps' the following year, 'The Lady Vanishes' in 1938 and 'Jamaica Inn' in 1939.

With the outbreak of the Second World War in Europe, he and Alma took the decision to move to America to pursue the greater opportunities available there, and in March 1939 they crossed the Atlantic and Hitchcock signed a seven year contract with David O. Selznick.

Once in America he was struck by the superior resources made available to him compared to the financially restricted English studios. He made a number of stylish black and white films starting with the psychological thriller 'Rebecca' in 1940, starring Laurence Olivier, Joan Fontaine and Judith Anderson The film was a big box-office success and also won the Academy Award for Best Picture - Hitchcock's only film to take the Best Picture Oscar - and it began a long string of successes: 'Suspicion' in 1941 was Hitchcock's last film with Joan Fontaine but it was the first of four successful teamings with Cary Grant whose suave demeanour made him one of Hitchcock's favorite leading men; 'Saboteur' in 1942 with its compelling finale on the Statue of Liberty; 'Shadow of a Doubt' in 1943, an unsettling film about a troubled family in a Californian town; 'Spellbound' in 1945 about psychoanalysis and featuring a dream sequence designed by Salvador Dalí; 'Notorious' in 1946 about a Nazi cadre in South America; and 'The Paradine Case' in 1947 about a beautiful woman accused of murdering her husband.

During the war Hitchcock returned to Britain to make two short films for the Ministry of Information, 'Bon Voyage' and 'Aventure Malgache', both in 1944 and both in French for the Free French.

'The Paradine Case' ended Hitchcock's often uneasy relationship with Selznick and thereafter Hitchcock produced all his own movies. His first color film was 'Rope' in 1948, the first of four films James Stewart would make for Hitchcock. Neither 'Rope' nor Hitchcock's next movie 'Under Capricorn' in 1949 made any impact with the public, but Hitchcock's most creatively inspired period was about to start.

Then in the second half of the 1950 the quality of his work actually increased, when he created four extraordinary masterpieces in 'Rear Window' in 1954, 'Vertigo' in 1958, 'North by Northwest' in 1959, and 'Psycho' the following year. In them he made a successful transition to color movies and widescreen formats and he succeeded in making films which challenged the audience as well as entertaining them. 'Psycho' became his best known film and the most profitable movie of Hitchcock's career.

Hitchcock embraced the new medium of television and during the 1950's became a household name with his weekly series called 'Alfred Hitchcock Presents' which ran for eight years. He always introduced the show although he only directed a few episodes, and he became a media star in America and the UK thanks to the popularity of the series. The theme music, "Funeral March of a Marionette," by Gounod will always be linked with his name. He was also happy to lend his name for a fee, to popular suspense and thriller magazines.

Hitchcock made fewer films after 1960. 'The Birds' in 1963 remains one of his most popular films and 'Marnie' in 1964 which again associated criminality with sex and violence, still has a cult following, but Hitchcock never again reached the heights of the previous decade. 'Frenzy' in 1972, was well received by the critics and his final film was 'Family Plot' in 1976.

Hitchcock had a stable and calm home life. Happily married in 1926 to Alma Reville, he rarely left his home unless shooting or promoting a movie. When he received a lifetime achievement award in the late 1960's he gave this warm appreciation of his wife:
"I beg permission to mention by name only four people who have given me the most affection, appreciation, and encouragement, and constant collaboration. The first of the four is a film editor, the second is a scriptwriter, the third is the mother of my daughter Pat, and the fourth is as fine a cook as ever performed miracles in a domestic kitchen. And their names are Alma Reville."

He was by nature a calm man with an old-fashioned, gentlemanly manner. He was not tall - about five foot eight inches - and he had a lifelong weight problem, not helped by his love of gourmet food and fine wine and his dislike of exercise. He was a voracious reader from an early age and he particularly loved biographies, travel books and real-life crime stories. He was also an avid theater and, of course, cinema lover. He was described by performers whom he directed as a man who knew exactly what he wanted in a movie. He never needed to raise his voice on set and never publicly argued with a performer.

Alfred Hitchcock was knighted by the Queen, becoming Sir Alfred, early in 1980. He died peacefully in his sleep on 29 April 1980, from renal failure in his Bel Air home. He was aged 80 and was survived by his wife and daughter. His funeral service was held in Beverly Hills and his body was cremated and his ashes scattered over the Pacific Ocean.

Even today, decades after his death, Hitchcock's films enjoy huge popularity. He is famous both as a creative artist and as a popular film maker. The adjective "Hitchcockian" has become part of the English language, referring to his dry humor and offbeat stories. His career straddled Silents, black and white Talkies and widescreen color movies. He showed a mastery of all forms of the movie.

We remember him for the masterful handling of suspense, ingenious fluid camera takes, detailed social observation, his personal cameos in all his films and for the "Macguffin" - a device to further the plot but which has no real meaning or purpose in the story. On top of all this, the dialogue in his movies is not only witty and pertinent, but often refined and stunning. Alfred Hitchcock was indisputably the master of suspense and is among the greatest of all film makers.

1927
The Lodger: A Story of the London Fog
The Ring
Downhill

1955
To Catch a Thief
The Trouble with Harry

1956
The Man Who Knew Too Much
The Wrong Man