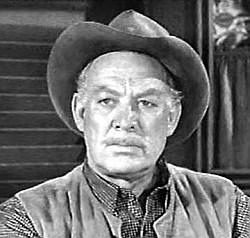 Ward Bond was an American film actor who appeared in many movies of Hollywood's Golden Age, always in a supporting role. It was not until late in his career that he achieved stardom, ironically on television, as the wagon master Major Seth Adams in 'Wagon Train'.

In all he appeared in over 250 films, seven of which appear in the American Film Institute's 100 Years... 100 Movies list - more than any other actor.

Ward Bond was born Wardell Edwin Bond in Benkelman, Nebraska, on April 9, 1903, the son of a lumberyard worker. When he was 16 his family moved to Denver and he attended school at Denver's East High School. He then enrolled at the University of Southern California and it was through playing American football for the USC team that he entered movies. Also playing for the USC team was John Wayne, then called Marion Morrison, who became a lifelong friend.

Through Wayne, he met movie director John Ford and became part of a group of USC players recruited to take part in John Ford's 1929 movie 'Salute', the story of Army versus Navy rivalry on the football field. From then on he and Wayne started to get regular bit parts in movies.

Both went on to follow a Hollywood acting career, Wayne eventually as a leading man and ultimately one of the greatest stars in Hollywood, and Bond always in the background, always in secondary roles, but gradually making a name for himself as a dependable and consistent member of the Hollywood acting fraternity.

For the first 10 years of his acting career Bond played mostly small character parts, sometimes non-speaking, often as crooks, cops, or western baddies because of his bulky 6'2" frame. Typical are movies such as 'Born Reckless' in 1930 where he plays a soldier, 'Quick Millions' in 1931 as a Cop and 'Lady for a Day' in 1933 when he portrays a Mounted Policeman.

His first important movie was in 1934 when he had a small, uncredited role in the award-winning 'It Happened One Night' starring Clark Gable and Claudette Colbert. Gradually his parts got bigger and by the end of the 1930's he started to get sizeable roles some provided with help of John Wayne who had become a major star after his appearance in 'Stagecoach' in 1939.

Bond's appetite for work was enormous. He appeared in 21 movies in 1939 alone including 'Young Mr. Lincoln', 'Drums Along the Mohawk', 'Confessions of a Nazi Spy', and culminating with his appearance as a Union officer in 'Gone With The Wind'.

During the following decade his roles, although still not starring, continued to improve. He appeared in several classic, award-winning films such as 'The Grapes of Wrath' in 1940, and the following year opposite Humphrey Bogart in 'The Maltese Falcon'. In 1942 he was the boxer John L. Sullivan in 'Gentleman Jim' and in 1946 in another award-winning movie, 'Its a Wonderful Life' as Bert, the cop. Again and again he appears in top class movies. During the 1950's he continues the trend with an appearance in 'Mister Roberts' in 1955 and the following year in 'The Searchers' and again in 1959 in 'Rio Bravo'.

One of his finest roles is in 1952 in 'On Dangerous Ground' when he plays the father of a murdered girl, who is looking for vengeance but does not find satisfaction. His acting in the movie is very moving.

Towards the end of his career Bond finally became a star in his own right, ironically on television, when he was cast as Major Seth Adams in the NBC western television series 'Wagon Train' in 1957. It was indisputably his program and he had a big say in the content. It became one of the most successful television Westerns ever, and later became the inspiration for Gene Roddenberry's 'Star Trek.'

Bond was an opinionated man who did not suffer fools gladly. Even during his period as star of 'Wagon Train' he was as well known to the public for his off screen clashes with his fellow cast members and his ultra right-wing conservative politics, as he was for the quality of his acting. He was well known and well publicised as an active member of the right-wing Motion Picture Alliance for the Preservation of American Ideals, whose major political platform was implacable opposition to communists in the film industry. Bond made many enemies by his hard-bitten stance against people in the industry whom he regarded as communist.

He was twice married. In 1936 he married Doris Childs whom he divorced in 1944. After 10 years of batchelordom as a hard-drinking member of the 'John Ford Stock Company', which included Harry Carey, Jr., Ben Johnson, and John Wayne, he married Mary Lou May, who was secretary to John Wayne's business manager. They stayed together until his death.

Ward Bond died suddenly of a massive heart attack on November 5, 1960 whilst on a visit to attend a football game in Dallas. He was 57 years old. His funeral eulogy was given by John Wayne.

1939
Son of Frankenstein
They Made Me a Criminal
Made for Each Other (uncredited)
Pardon Our Nerve
The Oklahoma Kid
Trouble in Sundown
Dodge City
Mr. Moto on Danger Island
Union Pacific (uncredited)
Confessions of a Nazi Spy (uncredited)
Return of the Cisco Kid
Orphan of the Ring
Young Mr. Lincoln
The Girl from Mexico
Waterfront
Frontier Marshal
Dust Be My Destiny (uncredited)
Heaven with a Barbed Wire Fence
Drums Along the Mohawk
Gone With The Wind
The Cisco Kid and the Lady

1944
The Sullivans
Home in Indiana
Tall in the Saddle

1945
Dakota
They Were Expendable

1946
Canyon Passage
My Darling Clementine
It's A Wonderful Life

1956
The Searchers
Dakota Incident
The Tomahawk and the Cross